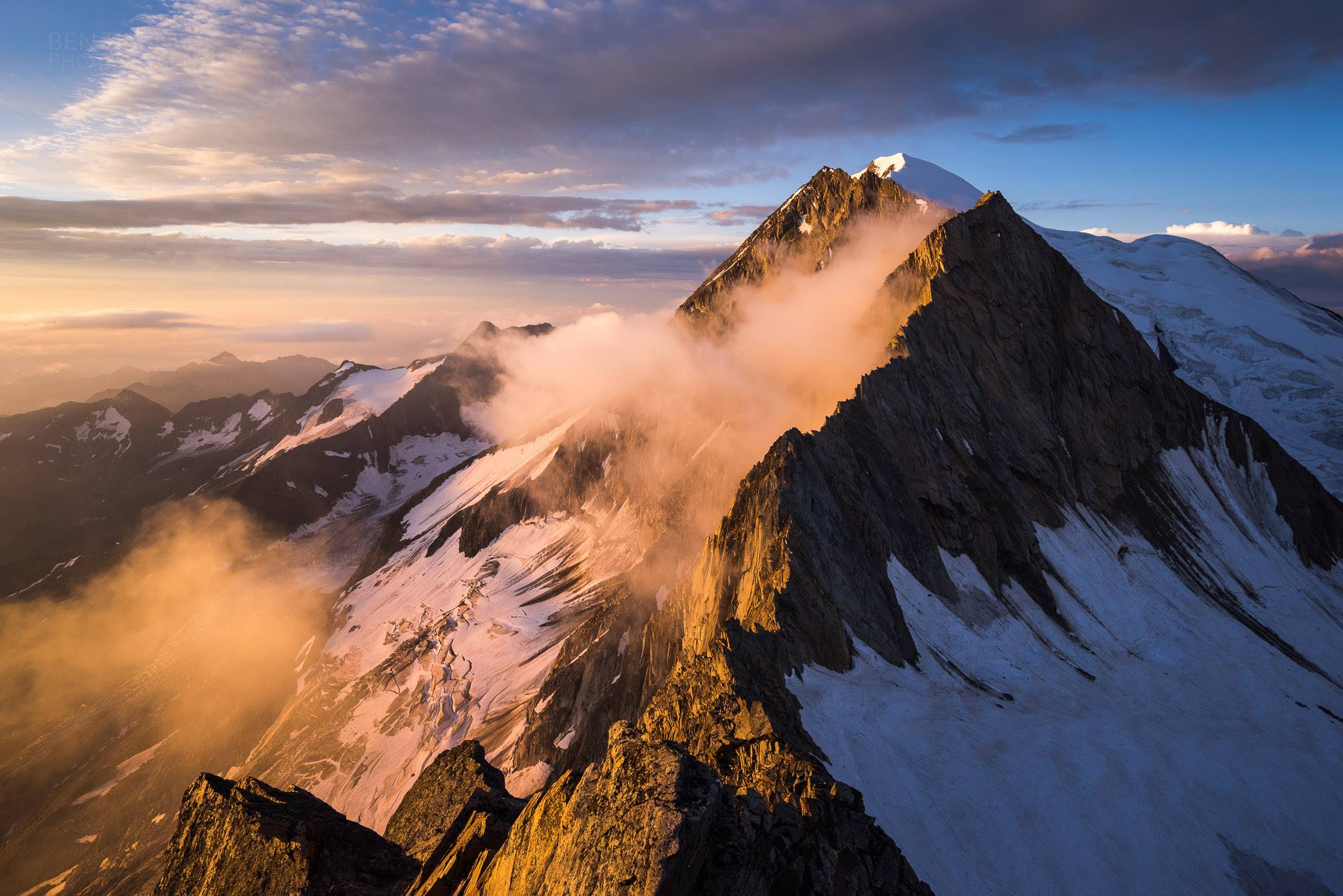 Weissmeis North Ridge from the Lagginhorn, Saas Grund, Switzerland
It was the sunrise that I hadn’t expected – often the best kind. Out to the east there was a bank of clouds shifting and growing as the still night air began to warm. I always carry a big camera and a couple of lenses these days. Nevertheless as we were climbing up I was pretty sure we were going to get a dead fish sunrise. I was still happy to be on the mountain, on a great route with good company. Brian and I had met in Greenland whilst ski touring near the idyllic village of Kulusuk on the east coast. He called me up sometime later to see if I had a few days free to do some climbing in the Alps. Of the routes I had a hankering to climb, the Lagginhorn South ridge seemed like a good choice given Brian was pretty much unacclimatised. The route is reversible for much of its length which is good if you need to get down fast.
_

It begins up a quick glacier traverse to a col that you can see in the bottom right of the image, then a long easy scramble leads up into the more engaging and exposed climbing terrain and thus to the summit and an easy descent. As the sun rose the light briefly filtered through a gap in the layers and burst through onto us and the jagged North Ridge of the Weissmeis opposite us. To the right is the valley of Saas, a popular alpine town. However to the left of the image the high Alps drop away spectacularly down into the wild foothills of northern Italy – an area I would highly recommend for exquisite and unfrequented hiking terrain. The light lasted only a few minutes before the playful cumulus clouds engulfed us. They remained clinging to the ridge on and off for most of the day with only the blade of sunshine peeking through. Eventually the cumulus build up into dark grey menacing masses and broke out into thunderstorms as we were on the descent. The Lagginhorn South Ridge, by the way, is excellent. The route finding is simple and the climbing never too tricky with has sustained interest right to the last summit moves.
–
Prints available here: http://www.bentibbettsphotography.com/Landscape/i-g3L3FGp/A
or come follow me on Facebook  – www.facebook.com/bentibbettspolarguiding
or instagram! – https://www.instagram.com/bentibbettsphotography/