Scottish Conditions – It’s all about the wind so far… 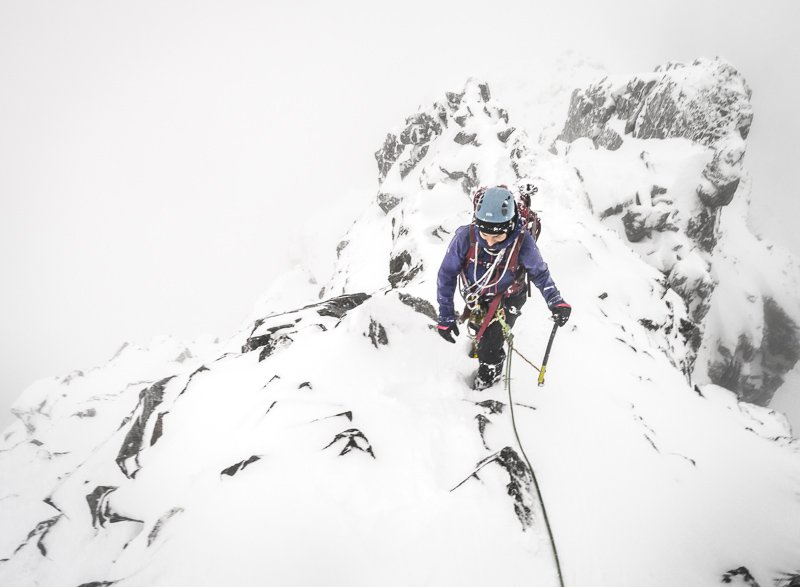 Today I went for a run. It is the first time I have seen the sun since I arrived in Scotland 12 days ago. The defining feature of the what I have seen so far has been the wind. Blowing cold, blowing warm, blowing snow + loading slopes. It has meant conditions have been changing very fast with quick freeze thaw cycles. Also the snow that is falling is getting blown about and charging lee slopes. With this in mind for 3rd and 4th days of Naomi’s introduction to winter climbing we headed west in search of ridges and a change of scene. On Thursday we took a late start as Geoff Monk (MWIS), aka ‘the harbinger of doom’, forecasted atrocious weather. We drove over and walked up to the CIC. Even on low-lying terrain the wind was trying to knock us flat. 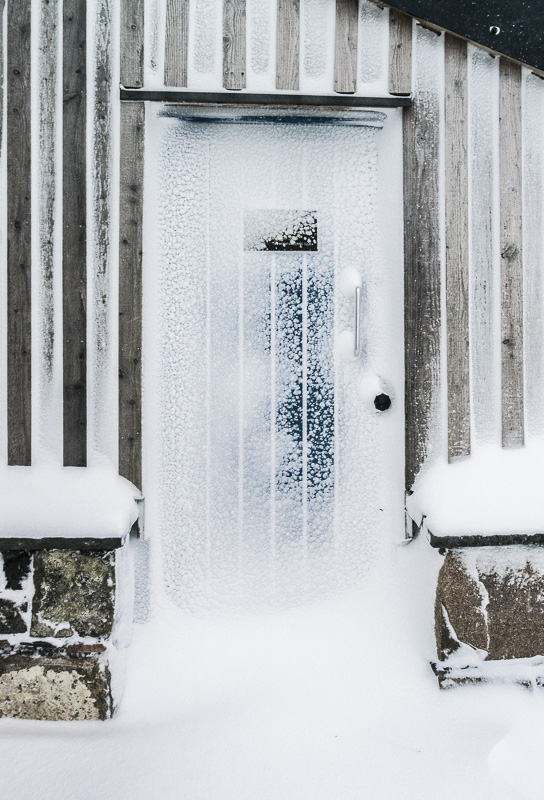 The CIC hut door – already a reasonable amount of snow at 680m. 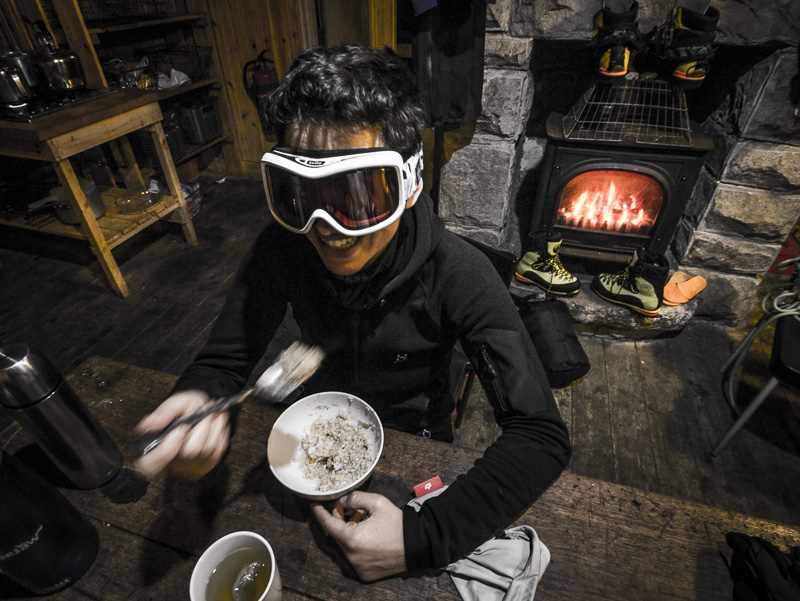 I haven’t been into the CIC hut for about 6 years, before its extensive renovation. Now it has the luxuries of gas heating, electric lights and two compost toilets. It is very comfortable and well maintained. The wind howled incessantly throughout the night and into the morning. The forecast was for a moderate lull in the wind in the morning before hurricane force winds by nightfall. A considerable amount of snow had fallen the preceding 48 hours and this was being blown by the ferocious SW winds, loading North and East slopes. The avalanche forecast was unsurprisingly considerable for slopes North through East above 800m. Also any of the bigger ridges would have been too committing an outing given the forecasted approaching storm, so I opted to have a look at Ledge Route to see if we could get up it and off safely and quickly before the next storm arrived. On Friday morning we got up and left before dawn, plodding between deep snowdrifts and scoured boulder-fields. We planned not to descend back to the CIC hut so we carried sleeping bags etc. up with us. 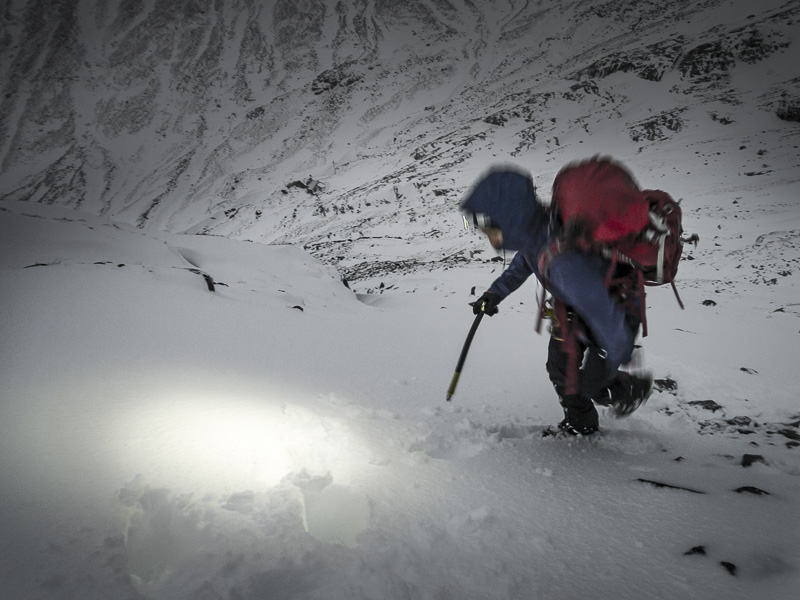 Naomi on the approach. CIC just visible in the bottom of the coire. 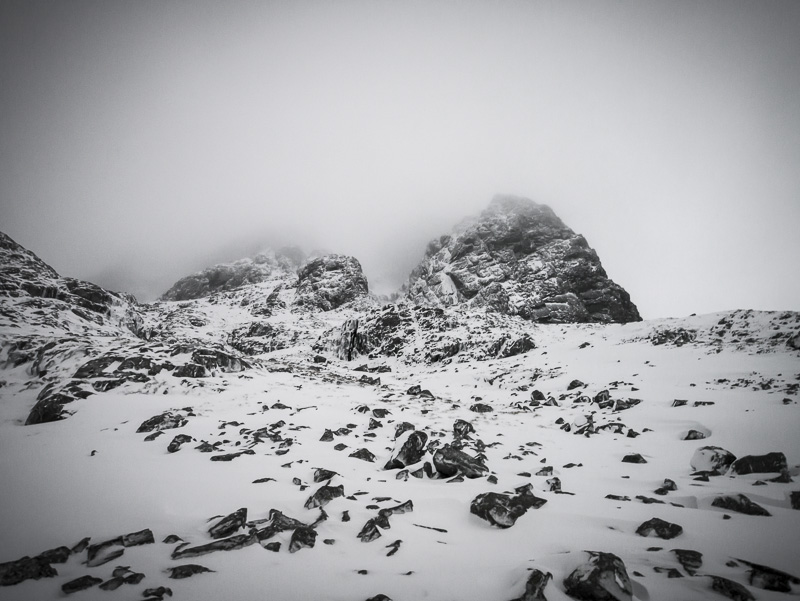 Gearing up. Douglas Boulder and Tower Ridge behind.

I had already planned to bypass the start of Ledge route which takes #5 gully briefly before heading out right up a ramp. It seemed certain that there would be significant loading high on all the gullies just waiting to come down. Sure enough as we approached the buttresses there was a massive fan of avalanche debris at the exit of #5. We skirted up left around and over the top of Moonlight Gully Buttress which allows one to cross #5 higher and meet Ledge route a little way up. Just as I was setting up a rock belay to protect us across the gully a thundering avalanche came down and didn’t stop flowing for a full minute. Despite the more moderate winds on the sheltered NE buttress apparently the winds were still raging and shifting massive quantities of snow higher up! 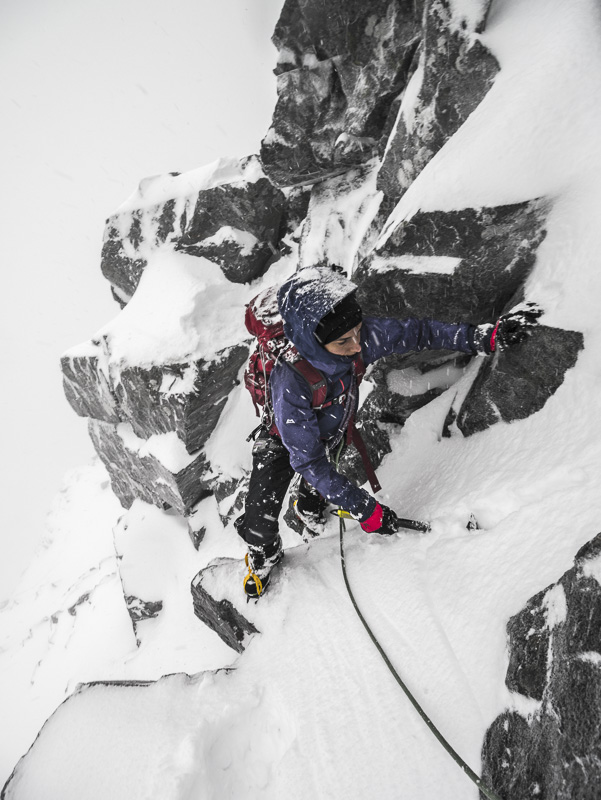 Approaching the ‘gangway’ on Ledge Route. 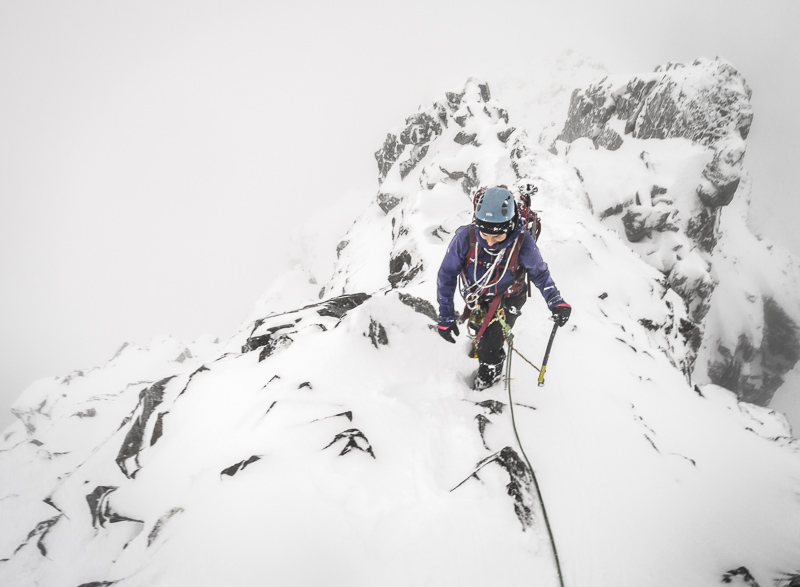 Towards the top of Ledge Route.

It turned out to be a good choice for the day, the limited technicalities didn’t slow us down so we kept moving and warm, yet the blunt ridge of the route kept us largely out of harms way. The cloud and snow persisted throughout the day, and when we topped out onto Carn Dearg summit the wind was already savage and visibility minimal. We walked blindly on a bearing, and then another to take us into the red burn, to the ‘half-way’ lochan, and so back to the Allt a’ Mhuilinn path. A challenging but nonetheless rewarding day out with no-one else seen on the mountain.