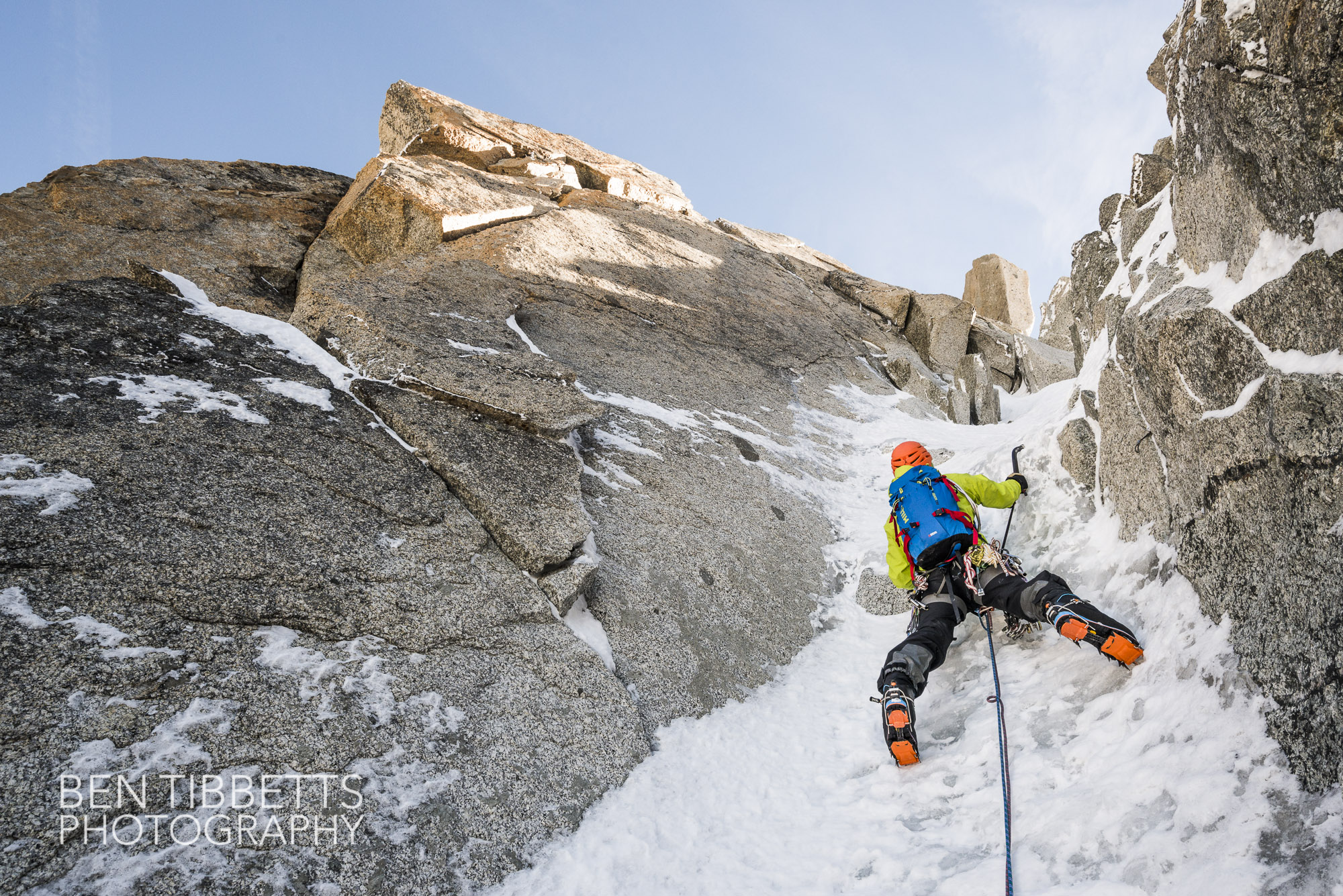 Having been working flat out all summer for my first season as an Aspirant Guide here in the Alps, I have had very little time to climb for myself. For the last 10 days since I finished working my legs have felt wrecked, but the conditions on the Jorasses and other big faces is so exceptional that I wanted to recover fast and go get something big and fun done! 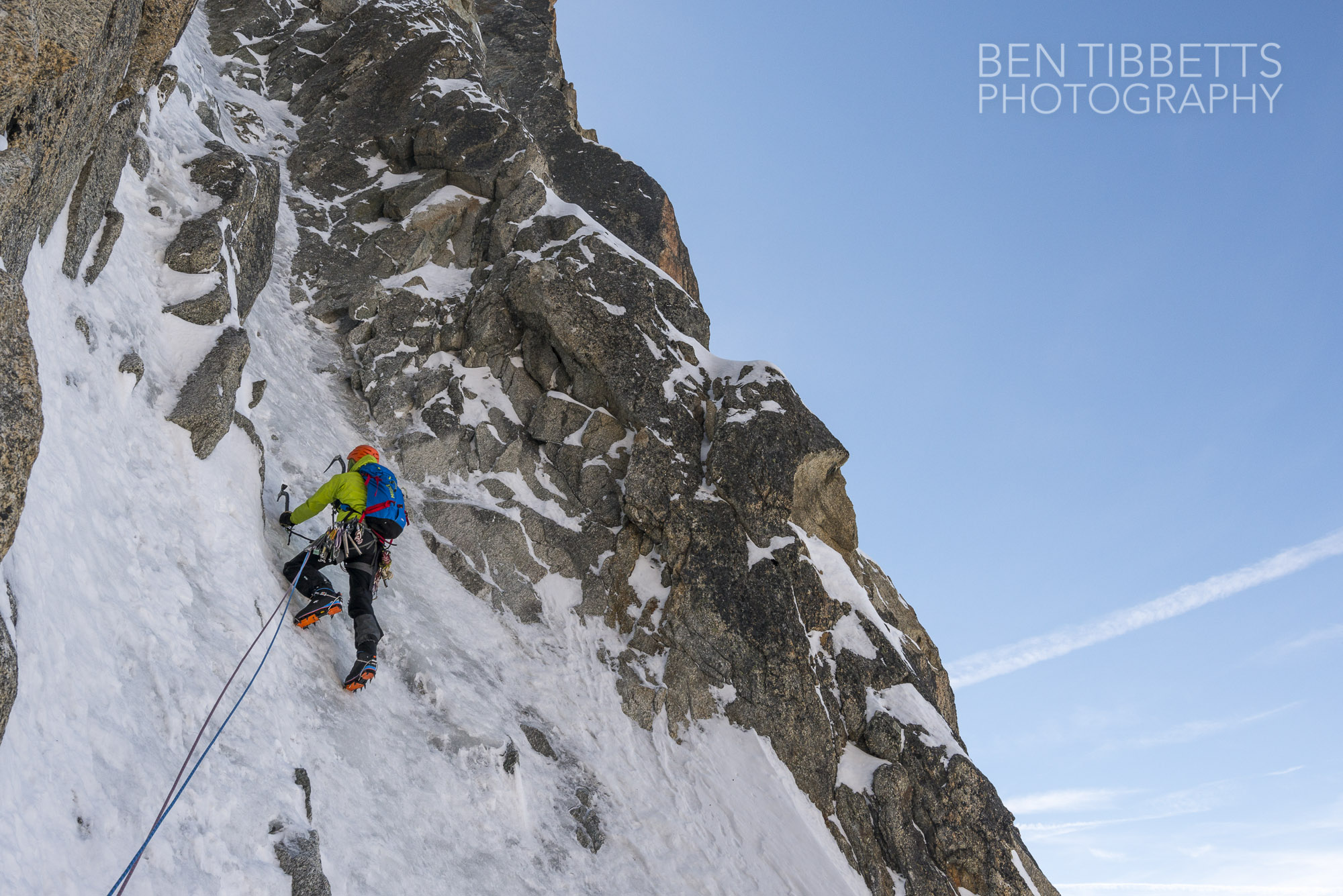 Misha Gopaul traversing into the main line of Profit Perroux.

Rather than just jumping on a big face having not swung a tool for months Misha and I nipped up to the Aiguille du Midi to warm up on one of the easily accessible routes on the north side of the Arête des Cosmiques. Having climbed the classic ‘Vent du Dragon’ last autumn – http://www.bentibbettsguiding.com/alpine-conditions-midi-tacul-2/, we opted for the sister route – ‘Goulotte Profit/Perroux’.

The first lift is at 8:30 this time of year which is very civilised. We took a quick coffee at the midi and geared up in the sunshine. Clear skies, no wind. After the free-hanging abseil off the Midi bridge, and a further 4 down the Cunningham Couloir, we arrived at the base. Two other American guides – Miles Smart and Thor Husted were starting on the Vent du Dragon which shares the first pitch and a half. After this (easy mixed) the Vent du Dragon breaks slightly left up an easy ramp line where you can see a bolt belay on the left wall. Another pitch takes you to a second bolt belay below Vent’s characteristic goulotte (photo below). We followed this pitch and then traversed into Profit Perroux at this junction, though possibly better done from the previous belay, gaining another pitch of goulotte ice. (see diagram at end!) 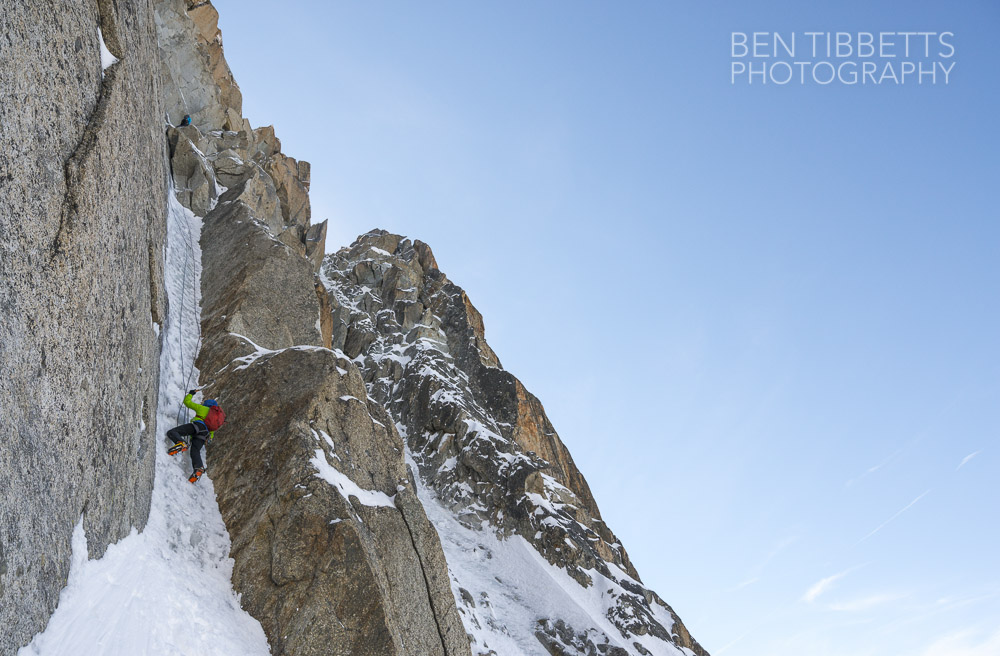 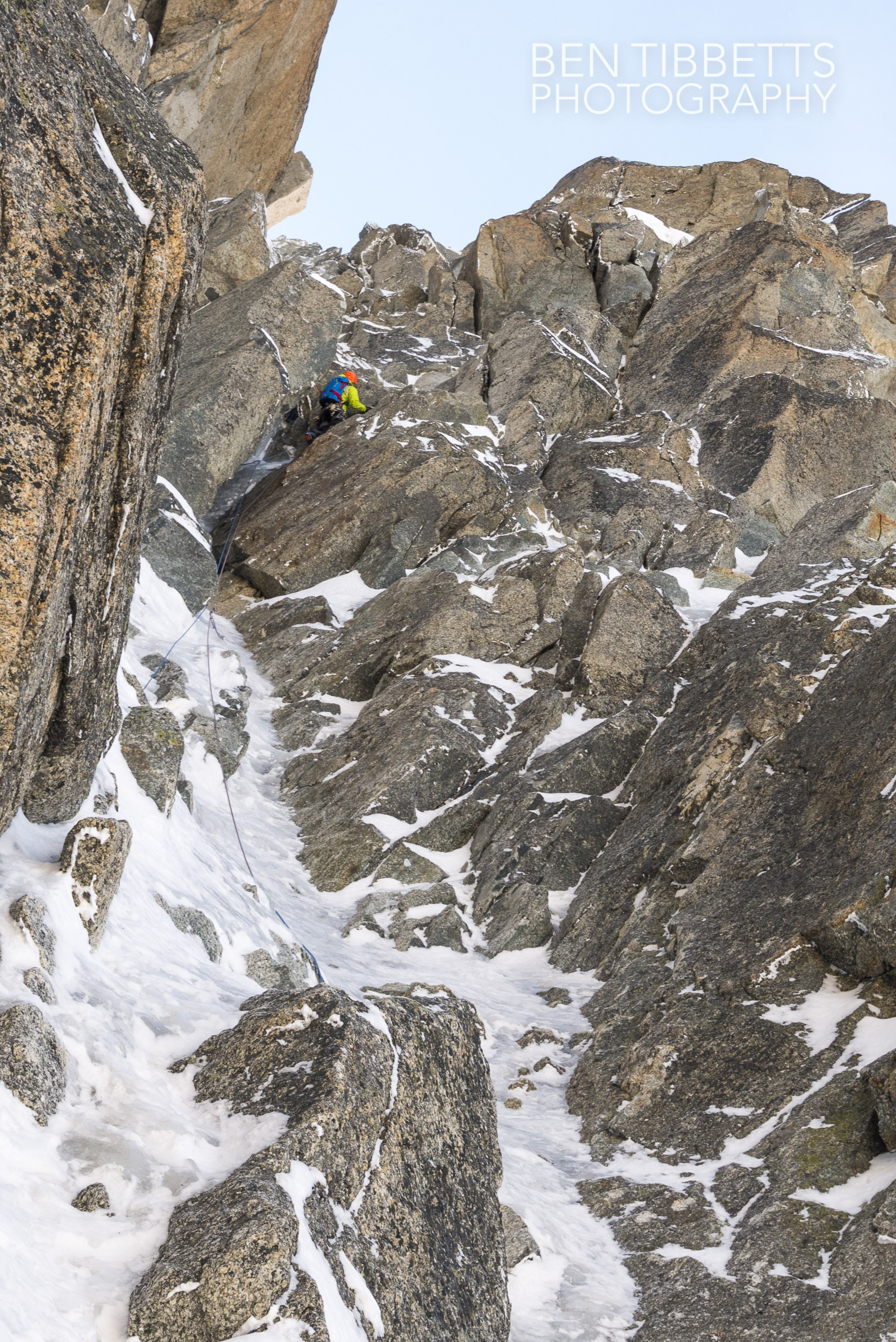 Misha on the chimney pitch.

The route is in superb condition, with the two main pitches holding great ice – just hard enough to take screws, but soft enough for easy axe placements. The main pitch takes a runnel of ice up into a chimney and breaks out right to a belay. At the moment there is ice right through the chimney and the whole affair is rather pleasant. 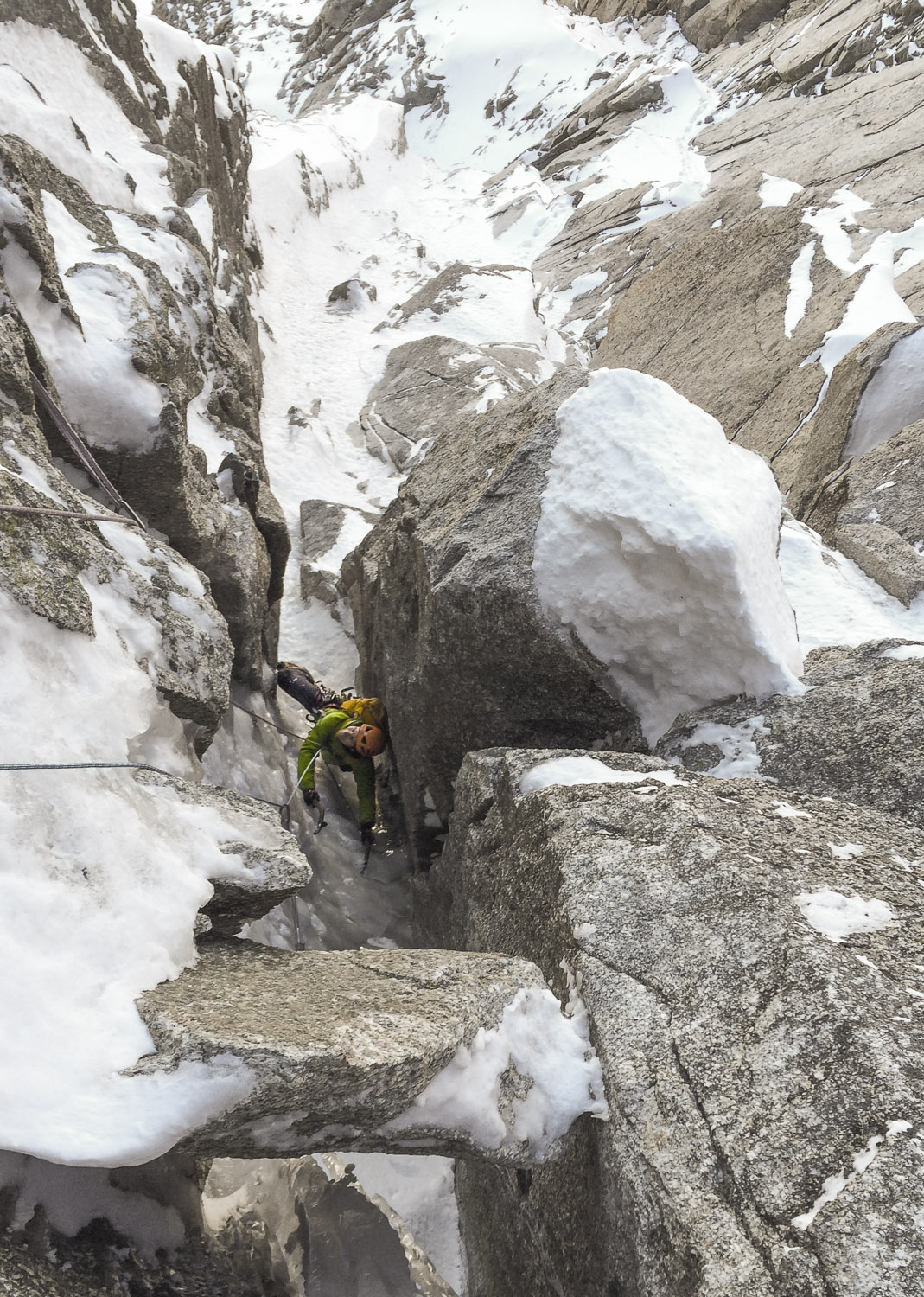 Myself climbing up the chimney. (photo Misha Gopaul) 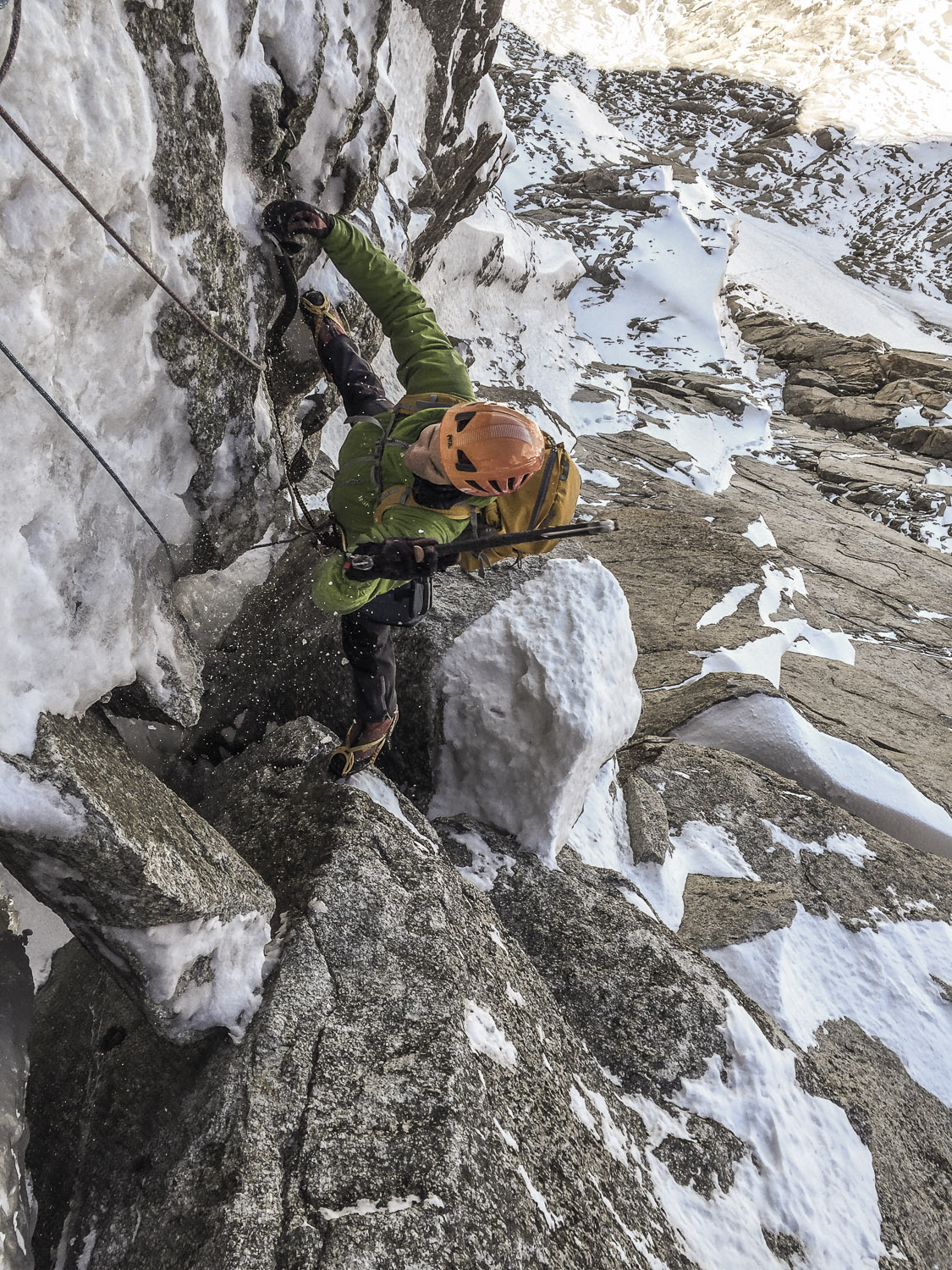 Climbing out of the chimney (Photo Misha Gopaul) 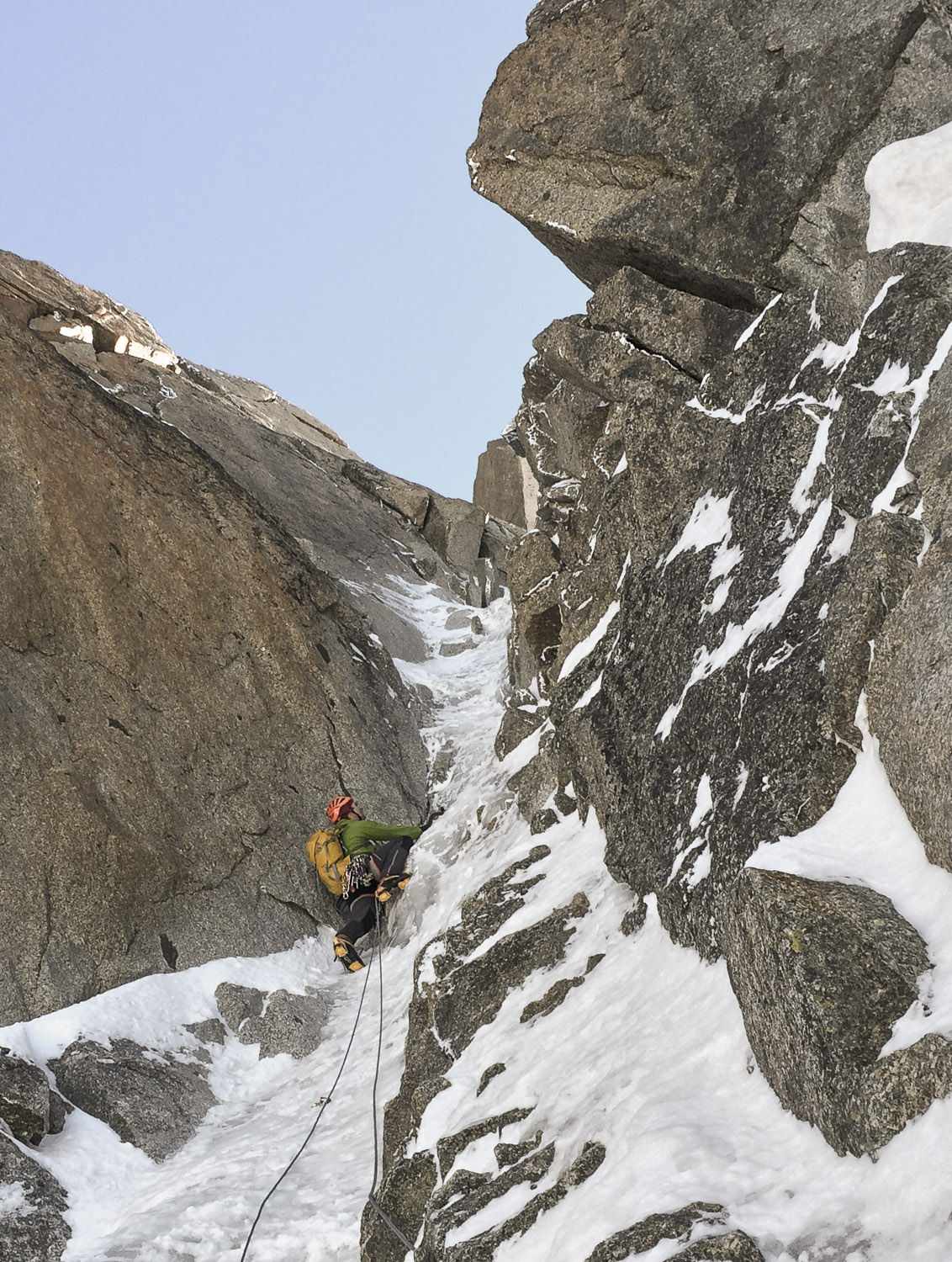 The ice couloir above the chimney…  (photo Misha Gopaul) 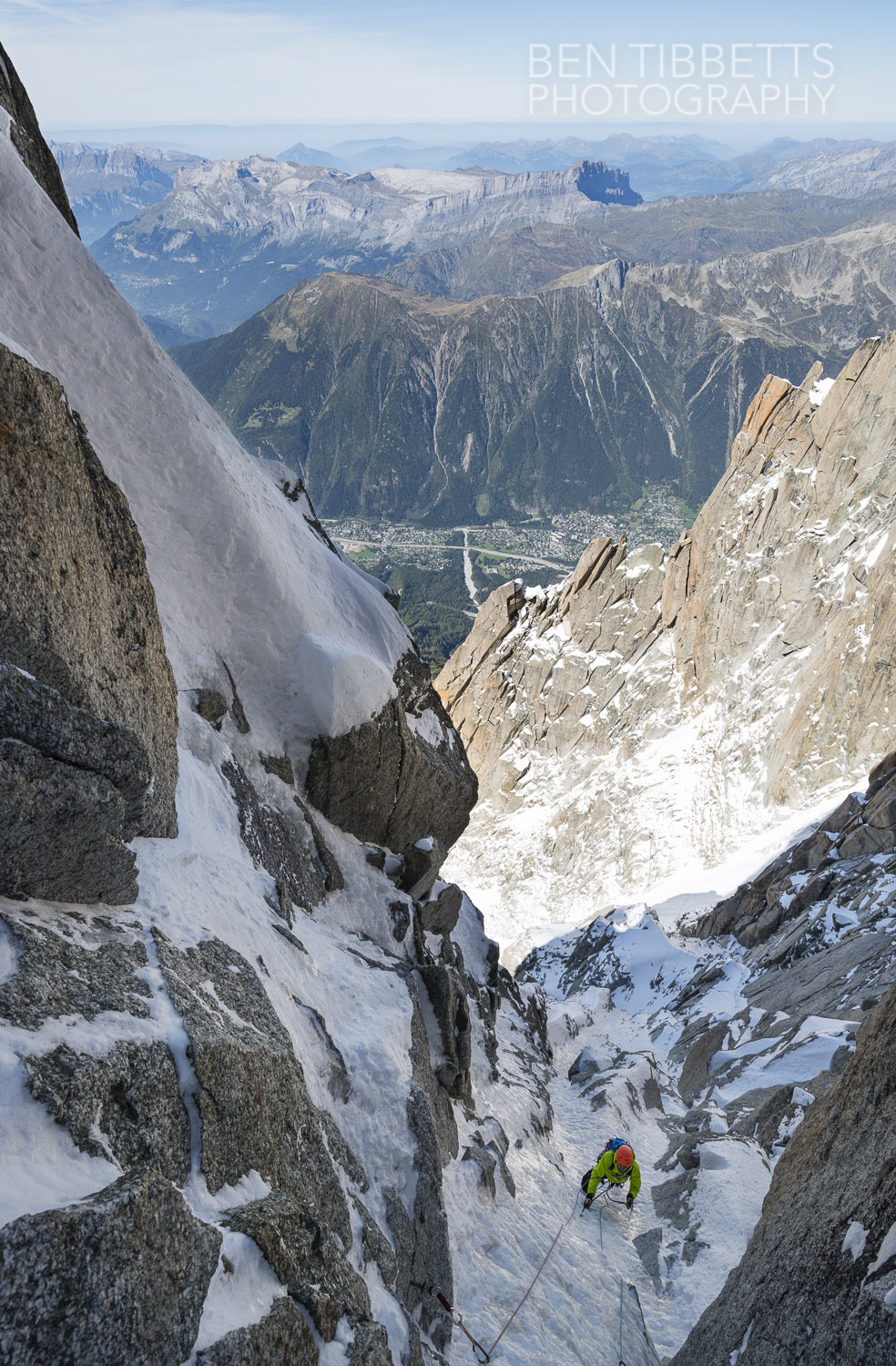 Misha coming up the couloir above the chimney.

After the Chimney pitch there is another mellow pitch of ice to the arete, though I put a belay in half way to take some photos… they didn’t come out so well in the end as I didn’t set up the belay in the best place!

Misha on the last section before arriving on the Arete des Cosmiques.

For a mellow day break this route has it all… easy access, a bit of acclimatisation for bigger routes, fun abseils, great climbing and a fun finish back up the Arete des Cosmiques to catch the lift down! 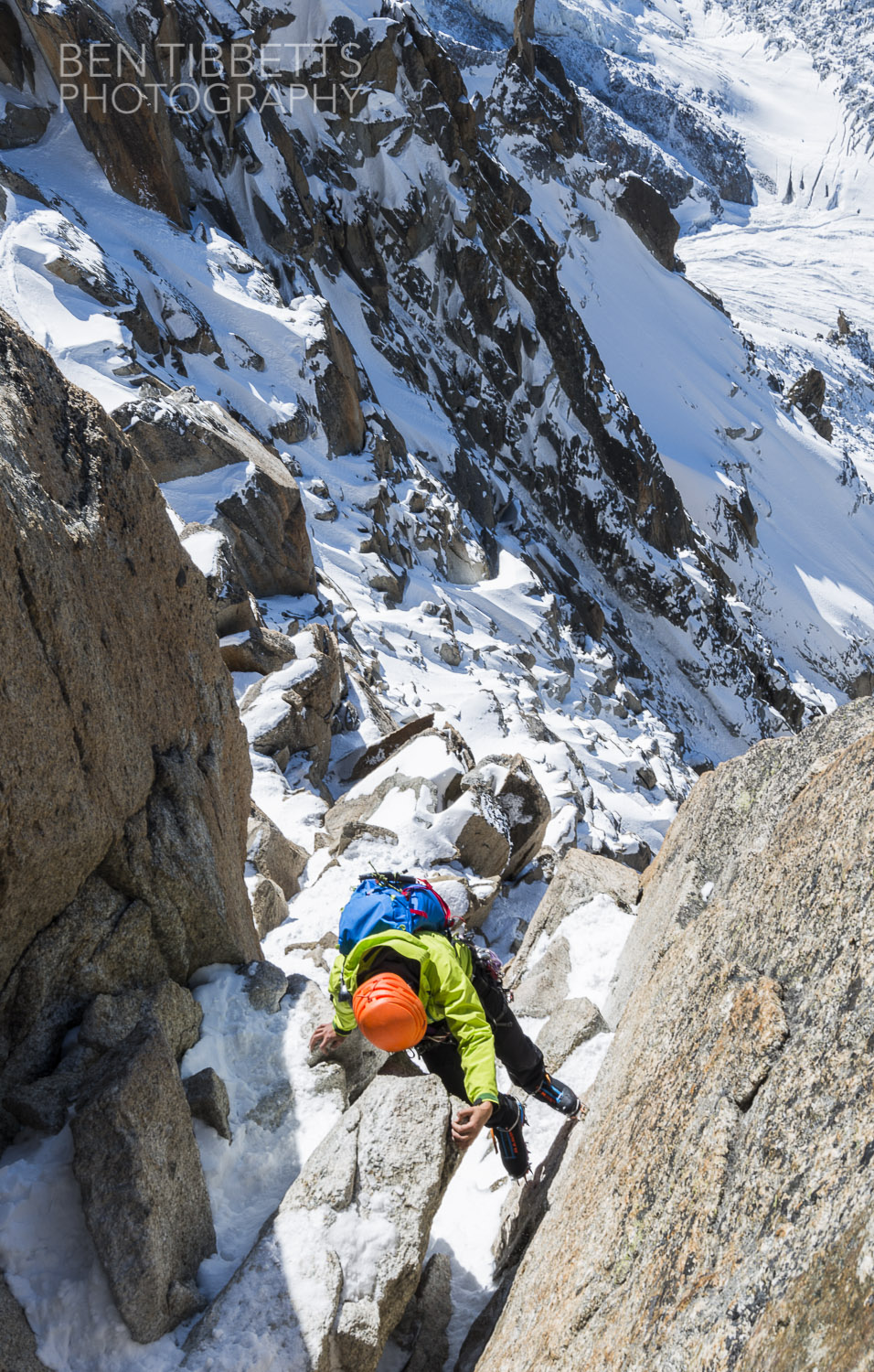 Misha on the Arete des Cosmiques 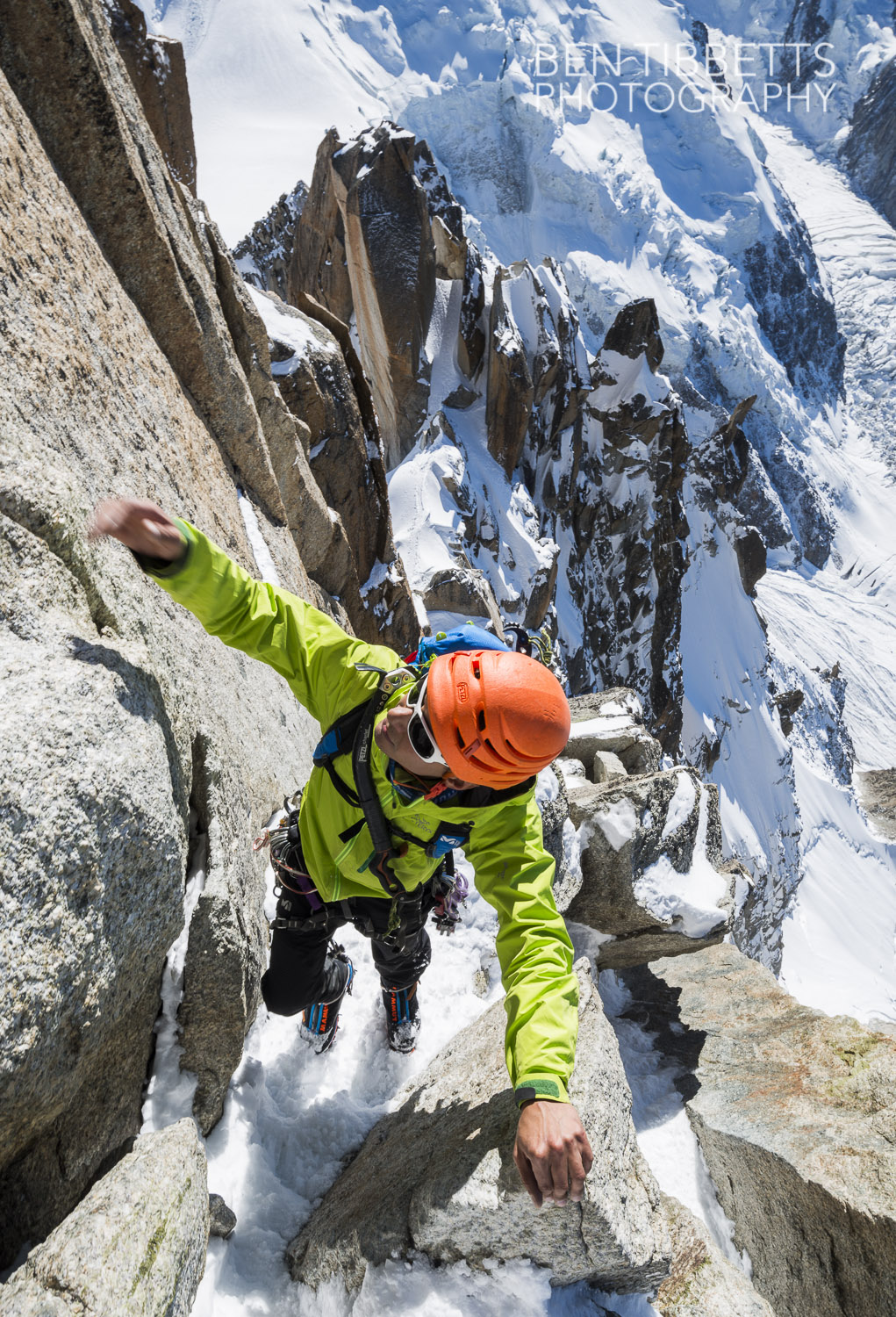 Misha on the final section of the Arete des Cosmiques 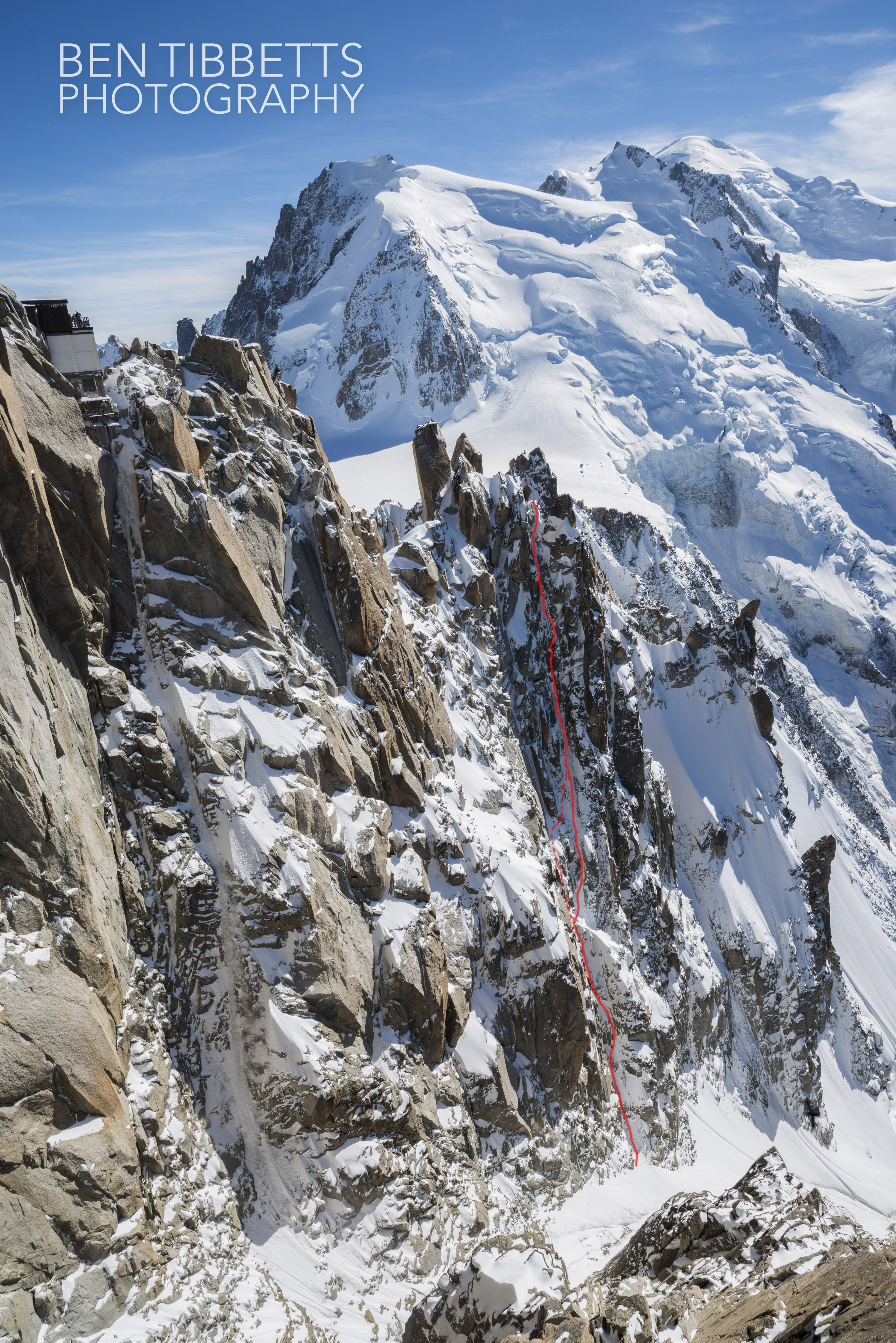 for the Vent du Dragon topo – this looks in great condition also!

Great day out and good preparation for the next adventure. Thanks Misha!

or visit me at