After the great dump of snow in Chamonix last weekend, the wind picked up, battered most of it into hard-pack and blew the rest away. This is great for filling in the glaciers and crevasses, though it seems to have blown most of it off the bigger faces before it had time and temperatures to transform into néve. Consequently things are still a bit dry for mixed climbing.

Tom Grant on the upper snow slopes of the Aiguille du Midi north face, with the téléphérique gliding just above us.

Having come back to Chamonix after a busy summer in Wales regaining fitness has been high on my agenda. Just before the big snowfall 10 days ago Tom Grant and I went to climb the Eugster Diagonal on the north face of the Aiguille du Midi, having seen tracks come out the top of it whilst riding up in the Midi lift. 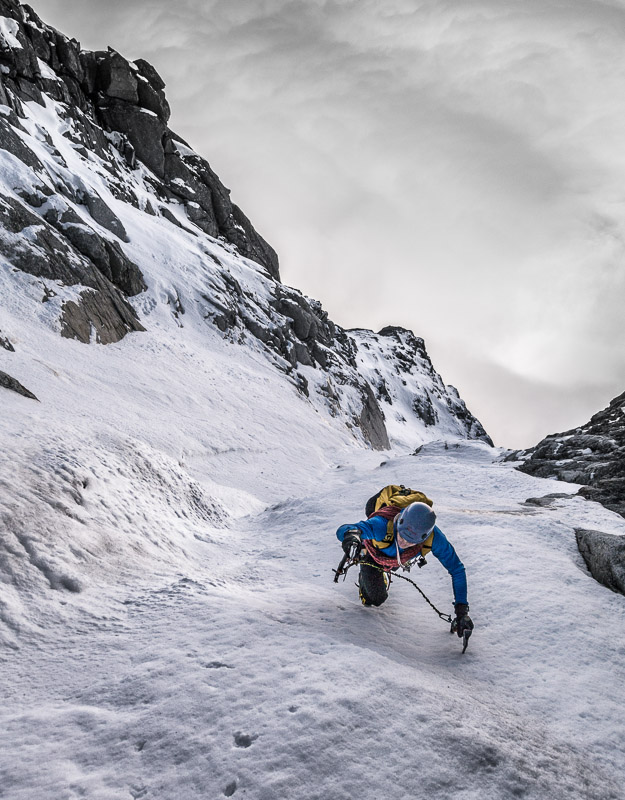 Tom moving rapidly on easy ground. After the initial dry pitch there was a lot of good néve.

Under good conditions it should be a bit of a romp, to the extent that Tom has actually skied the line three times (albeit an extreme ski with at least one obligatory rappel each time). We were possibly a bit too casual about the affair though and took a late lift up in the morning and didn’t get to the base of the route until 10:30am. Likewise we carried only a tiny amount of gear as we were expecting to solo all, if not the majority, of the route. There was a thick soupy inversion hanging in the valley, and the base of the route was lapping in and out of the cloud. 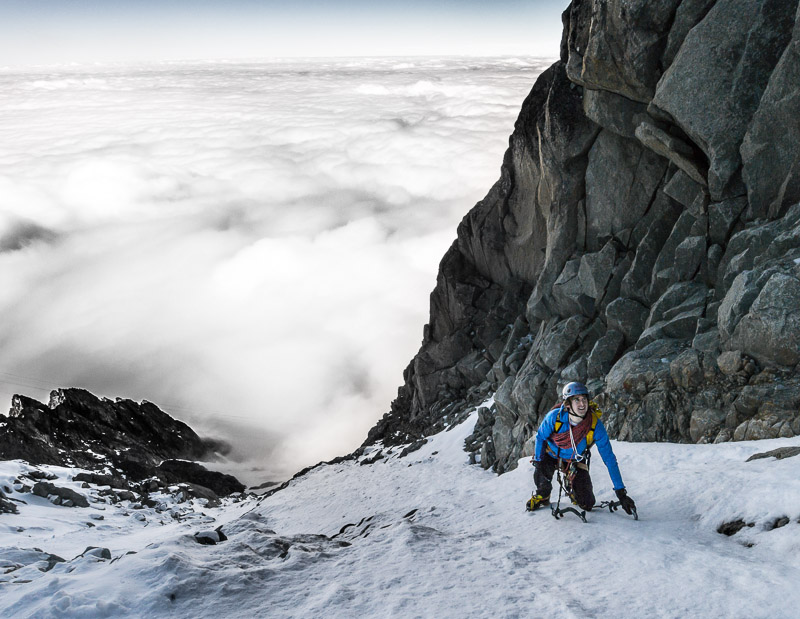 Tom pausing on mellow terrain after the diagonal traverse

The summer has been very warm and much of the snow has melted off the alpine faces, leaving a lot of steps of bare and loose rock where often there is easy angled banks of snow. It quickly became clear that the entrance to the broad gully of the Eugster was totally devoid of snow or ice and presented a tricky steep wet rock slab. To the left was a hanging cleft that looked easier, but only gave in after Tom had invested a considerable amount of time trying to find a good way that wasn’t loose. Despite looking fairly amenable it was probably M5 and divested Tom of nearly all the gear before the belay, which was unfortunate. After another short delicate pitch we got into the route proper and were able to move much more quickly. The route goes up for several hundred meters and where the Eugster Direct (which looks desperately dry) continues straight up, some rocky steps lead leftwards over a spur and into another gully line. The route was originally climbed in 1912 and then descended by the same line. Though one can presume that most of the route then was a line of perennial snow, it was still an audacious achievement. In the current dry conditions we came across several mixed steps that gave pause for thought, and then a few pitches here and there we put a rope on, rather than scare ourselves!

Myself midway up the route on a mixed section, where the ski descent normally takes a rappel. Photo Tom Grant

After about 700 metres the route pops out onto the upper snow slopes of the face, where we had seen tracks the day before from the lift. We were thankful for these as the snow up at this altitude was sometimes knee deep in places where it hadn’t caught the sun. By now we had taken much more time than we had expected and had to keep moving steadily to make sure we caught the last lift down. We were a little surprised after several hundred meters of snow to then find a steeper section of tough old black ice just on the final slope to the Midi! We popped a rope on for a short section rather than risk it at the end of the day and made it up in time to get the last lift, but with only 15 minutes to spare! 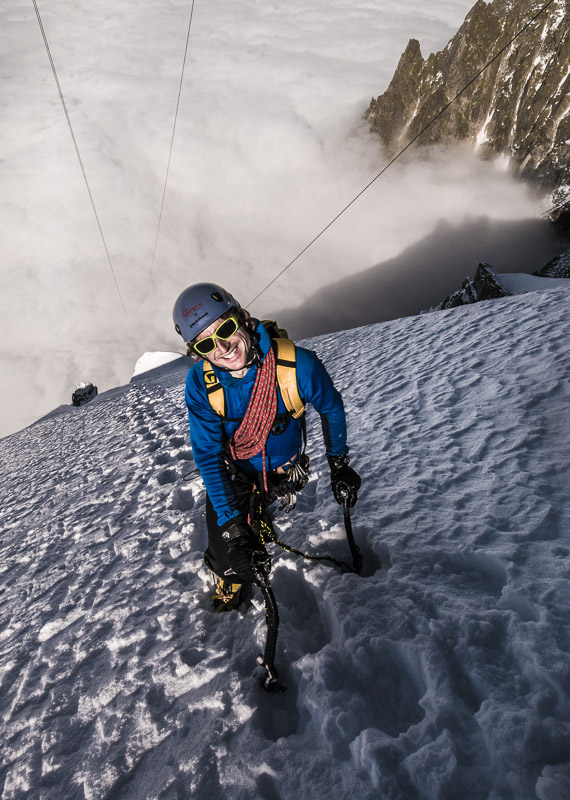 Tom on the upper snow slopes of the north face. Catching the afternoon sun.

On Friday I was over in Zermatt with Misha who has his entrance test for the Swiss guides scheme this coming week. We drove over from Chamonix for a quick day hit to use the Zermatt lifts and practice some ski technique. The north face of the Matterhorn doesn’t look in especially good condition either: 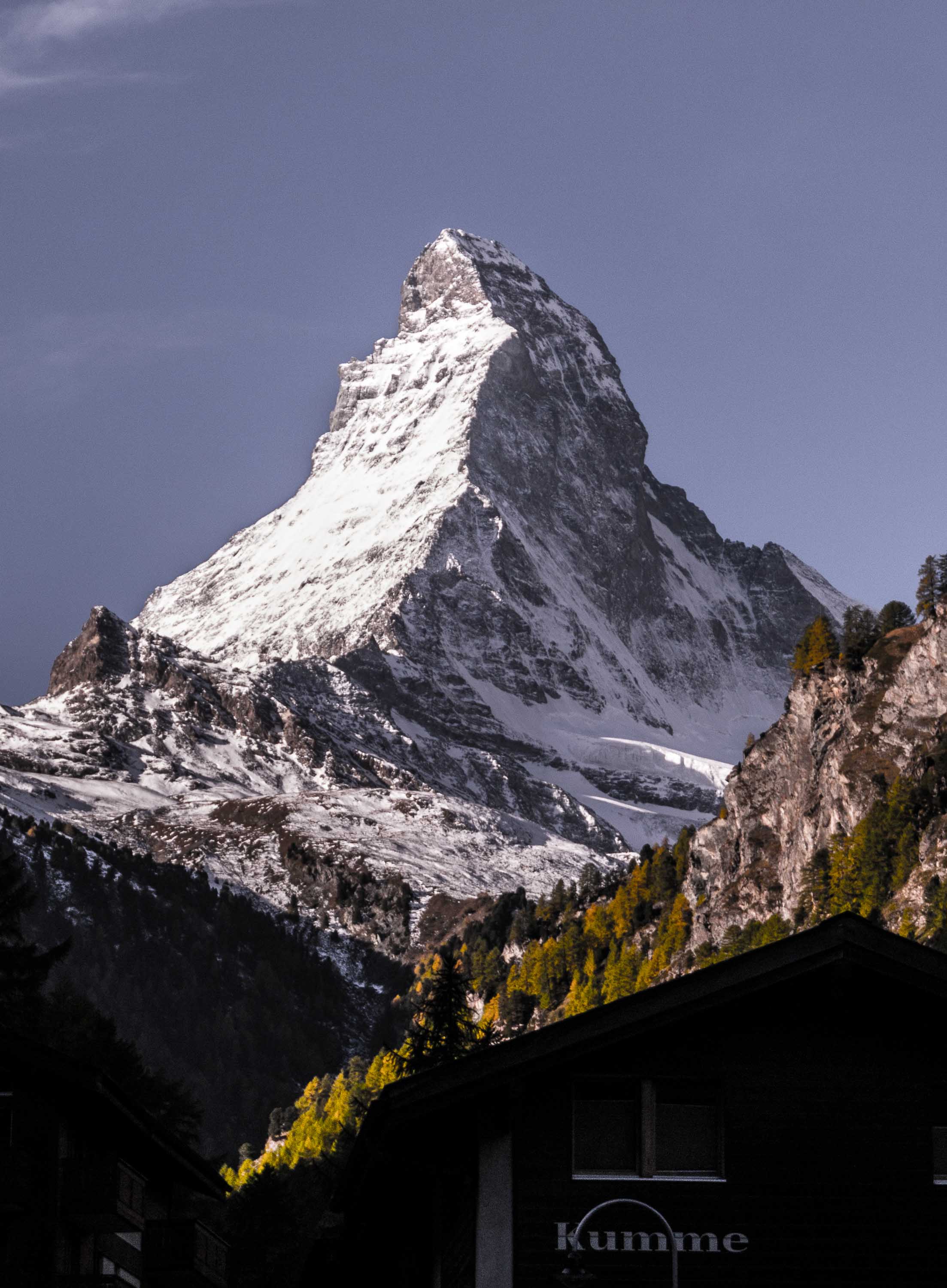 The snow around the ski area was again fairly hardpacked, but off piste softened up later in the day when the sun hit. 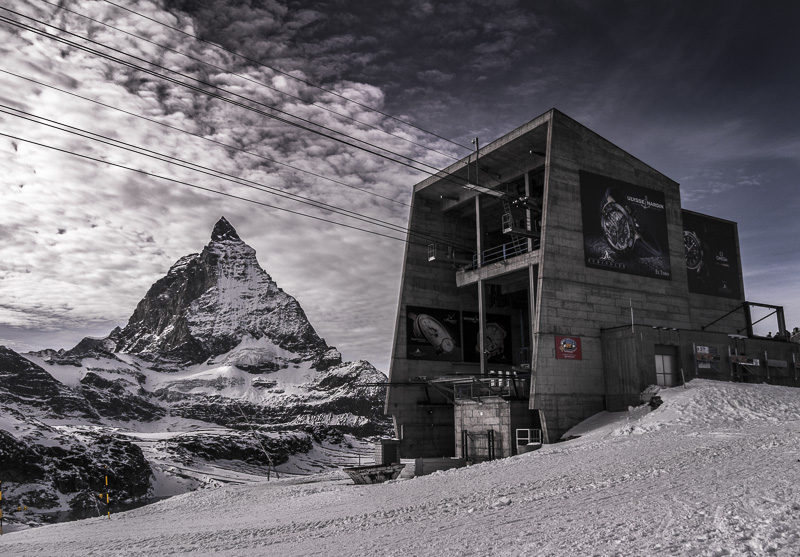