November delivered some unruly weather out in Chamonix, with significant snowfalls and snow lying to the valley floor for much of the month. Once the Aiguille du Midi lift closed though one had to try much harder to get up high onto the consolidated snow pack, and onto the glaciers. The direct summer path up to the Albert 1er refuge remained passable, albeit increasingly difficult, throughout the month. As with my last post, I made several more trips up around the Aiguille du Tour for fun and training. The great benefit of getting onto glaciers this time of year is in being able to ski with confidence that you aren’t going to snag a rock ‘shark’ whilst descending and wrench your weak early season knees. 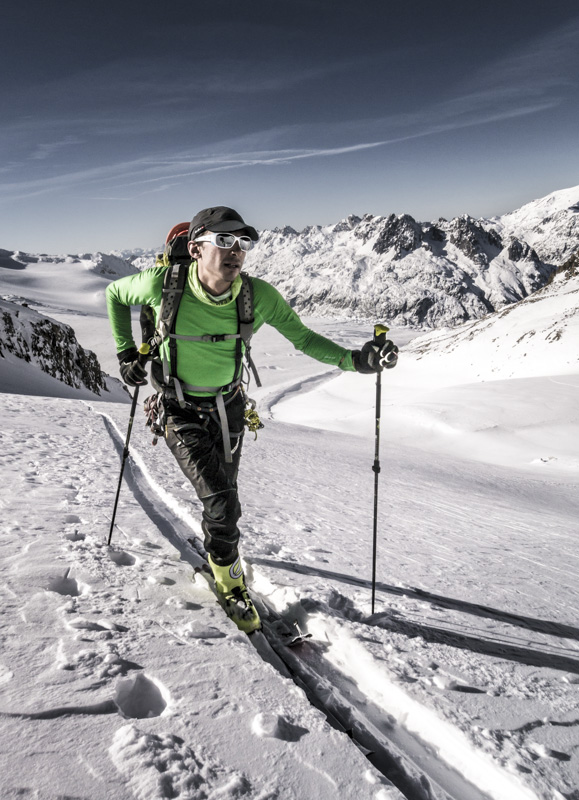 Misha and I had several great days out training on skinny race gear. Glacier du Tour by Signal Adams Reilly.

Beth, A friend I first met in Greenland, came out for a few days over a clear weather spell. We planned a similar itinerary up the Glacier du Tour from La Tour, but then extended it over to the Trient Hut overnight. 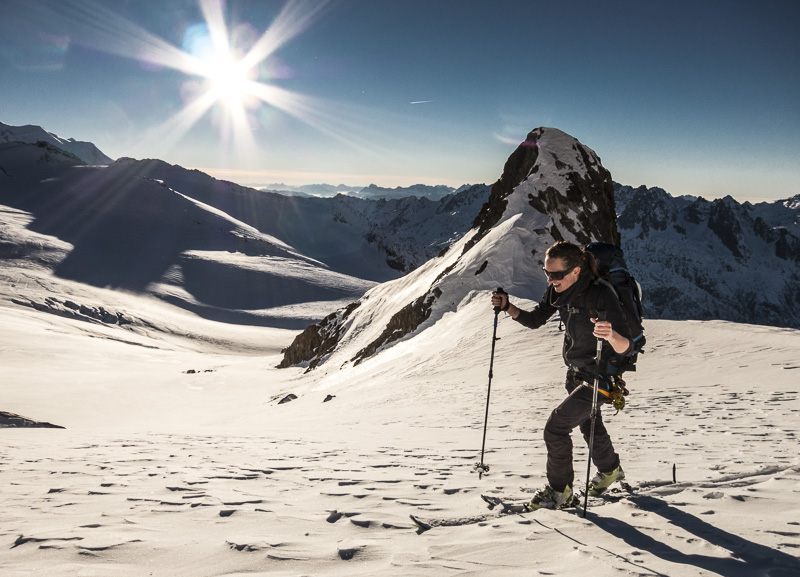 Beth by Signal Reilly on the  Glacier du Tour.

Beth soaking the sun up on the Glacier du Tour!

We had gorgeous conditions on the first day. After the energy consuming slog to reach the morraine there was a good snow surface for skinning. There is lots of work going on to refurbish the Albert 1er refuge, though as it was a weekend none of the builders were about. 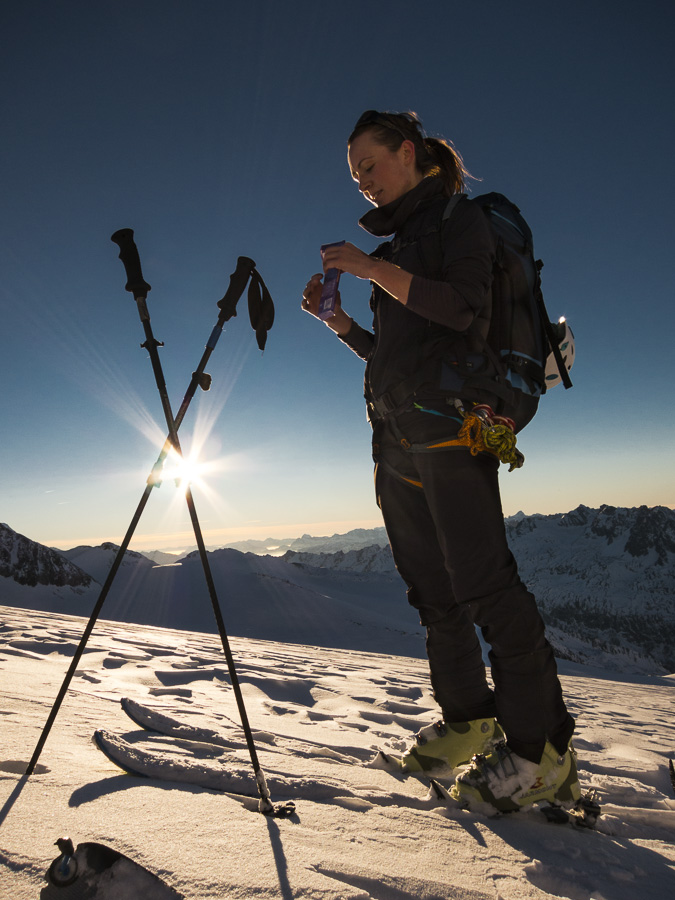 We started the day from La Tour fairly late in fact so we were heading up the Col Supérieur du Tour towards sunset.

The skies were still clear, but a moderately strong cold ‘Bise’ wind started to blow in from the North. As we got up into the rocky Col it was dark, windy and becoming cold. Spindrift was blowing up to head height around the Col itself, but we moved quickly down onto the Trient glacier plateau where it was more moderate. We put our headtorches on, but the moon was large and full and if we had not have been keeping an eye out for crevasses it would have been ample to ski by. 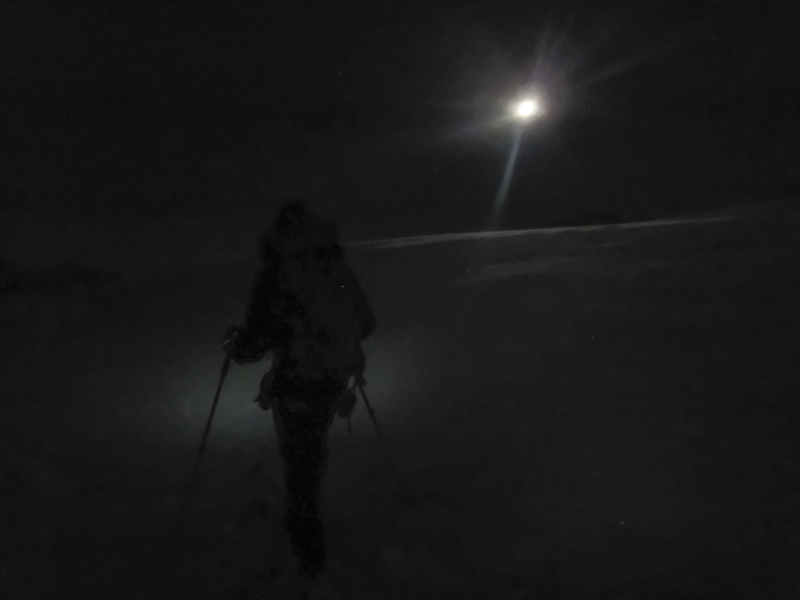 The Trient refuge is a great spot for an overnight stay, yet more so in the winter when its inaccessibility assures it is rarely frequented. It is cosy and well appointed with a wood stove and ample fuel. Unfortunately my camera batteries had died through exhaustion by this point so we had to share Beth’s for the rest. The next day we were well placed for an early start on the Aiguille du Tour. This is a great route to take in whilst ski touring as it is moderately technical and interesting, but not so much as to require an extensive amount of gear. Under winter snow it is a little bit more tricky and interesting than normal dry summer conditions for which it is graded. 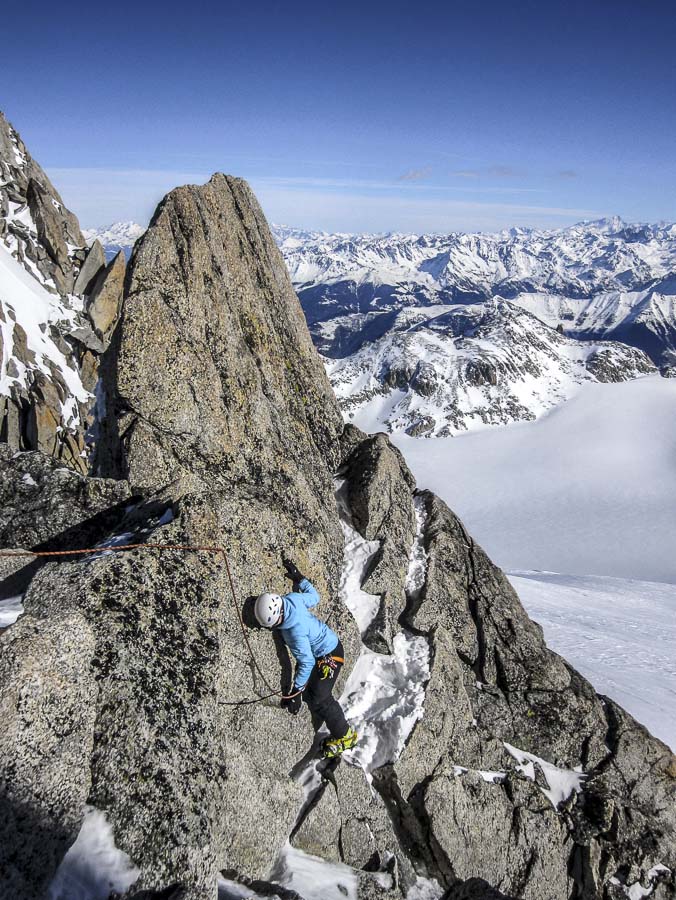 Beth traversing a gendarme on the Aiguille du Tour. 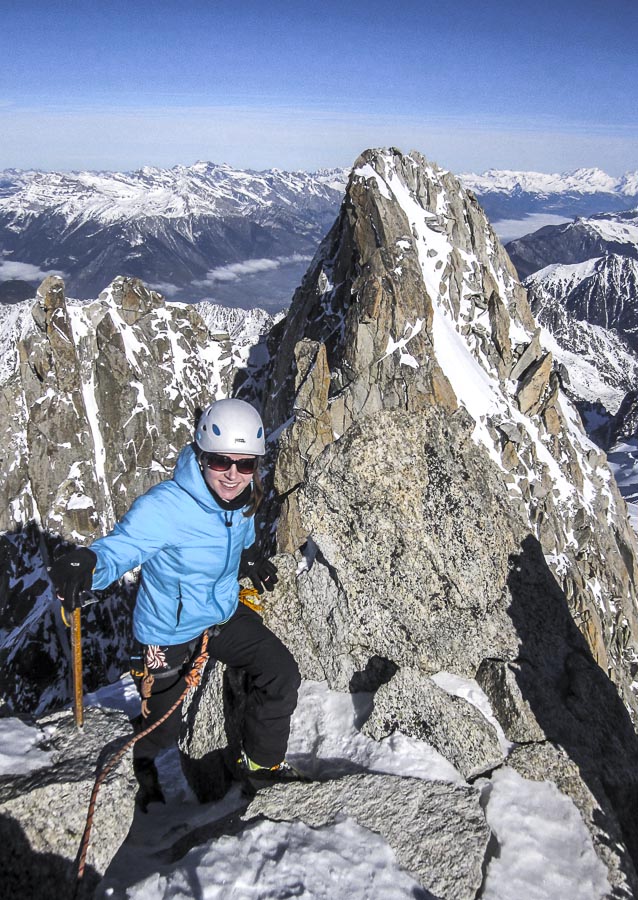 Approaching the summit of the Aiguille du Tour. 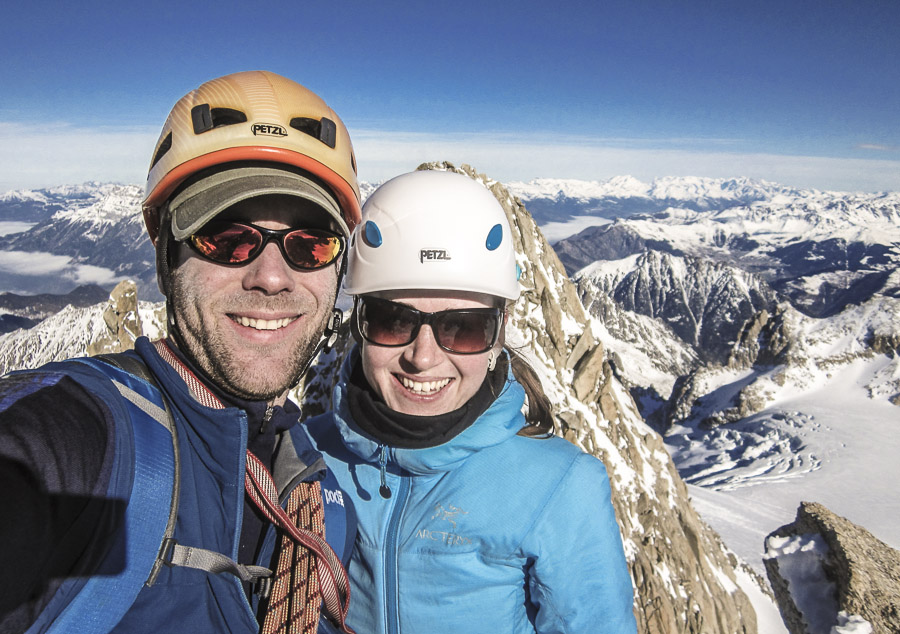 On the summit of the Aiguille du Tour.

Unsuprisingly we didn’t see a single other person for the two days, and I could still see Misha, Laurent and my ski tracks from previous trips this month. Conditions were still reasonable on the descent, though the snow had been worked by the wind and was crusty in places. It nevertheless provided a good long ski back to the valley.

Towards the end of the month there was a lot more snow and La Tour became a good spot for a bit of training, and even the odd stash of powder. After a fresh dump Toto (girl), Kynan (dog) and I found especially good snow: 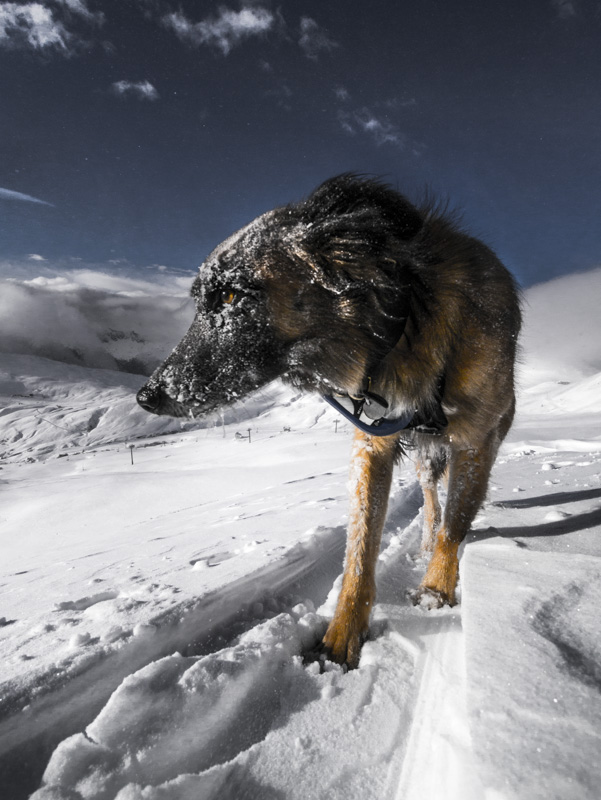 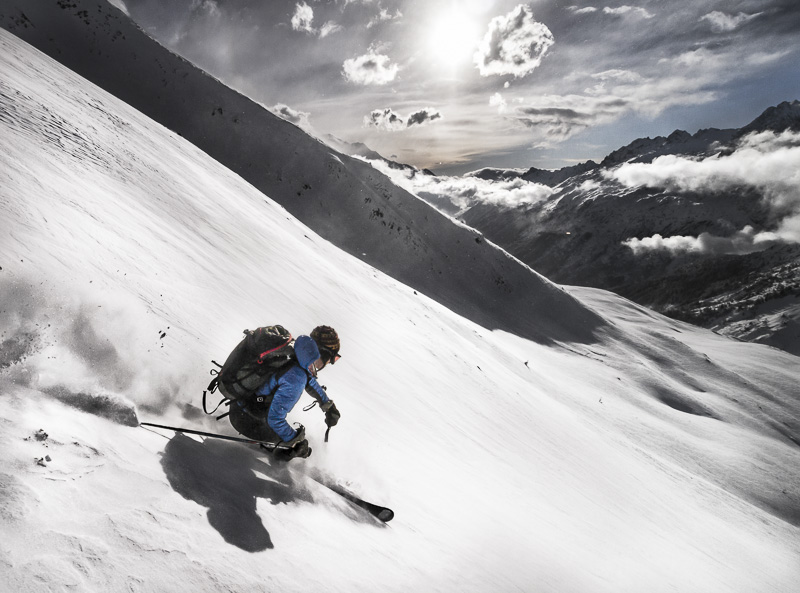 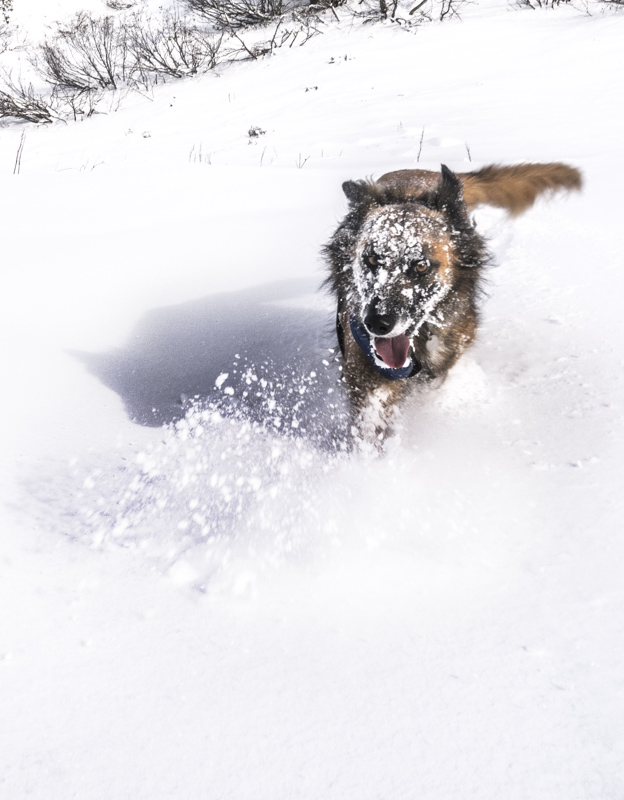 Kynan in the powder

In the first week of December I started to increase my training intensity a bit in preparation for an engaging calendar of racing this winter. I found time for some bigger days out, including 3700m skinning one day up and around Grand Montets. 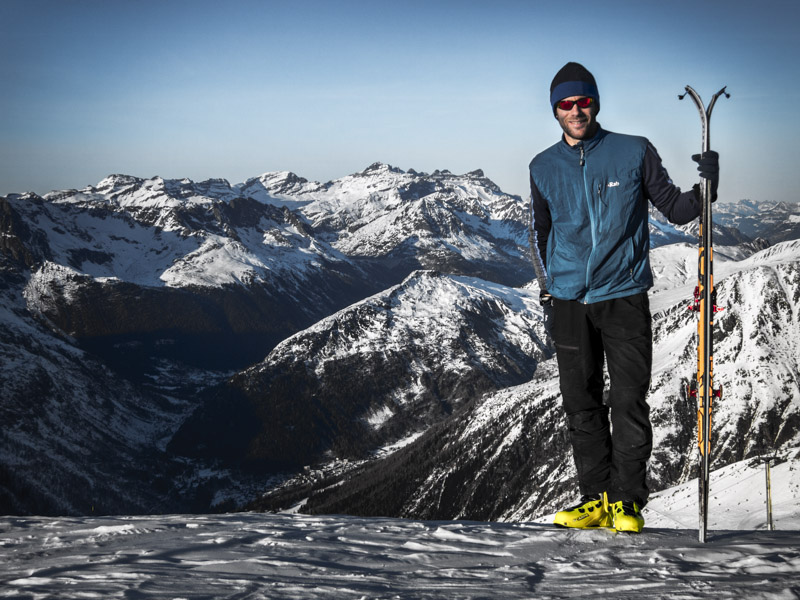 Myself with skinny race gear at Grand Montets before the lifts opened. 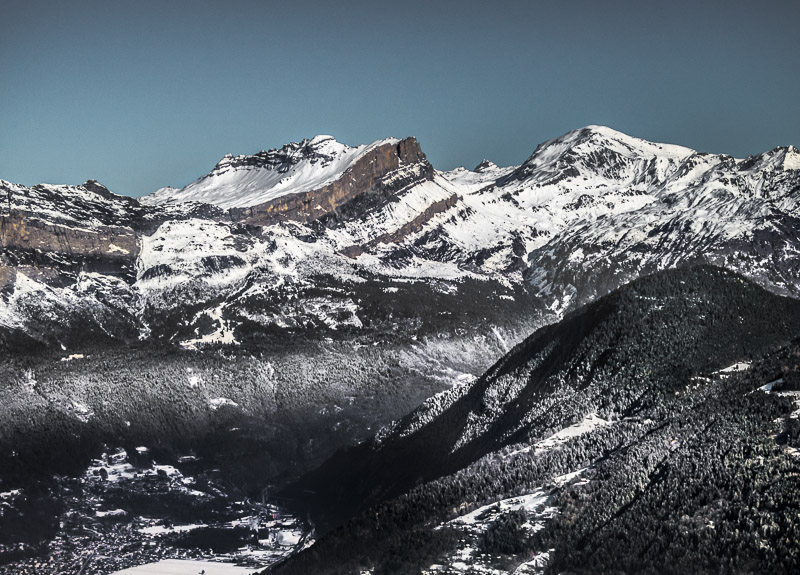 Chaîne des Fiz from Mont Joux. There had been a strong temperature inversion for two days which left a line of frost across the mountain sides once the cloud finally burnt off.