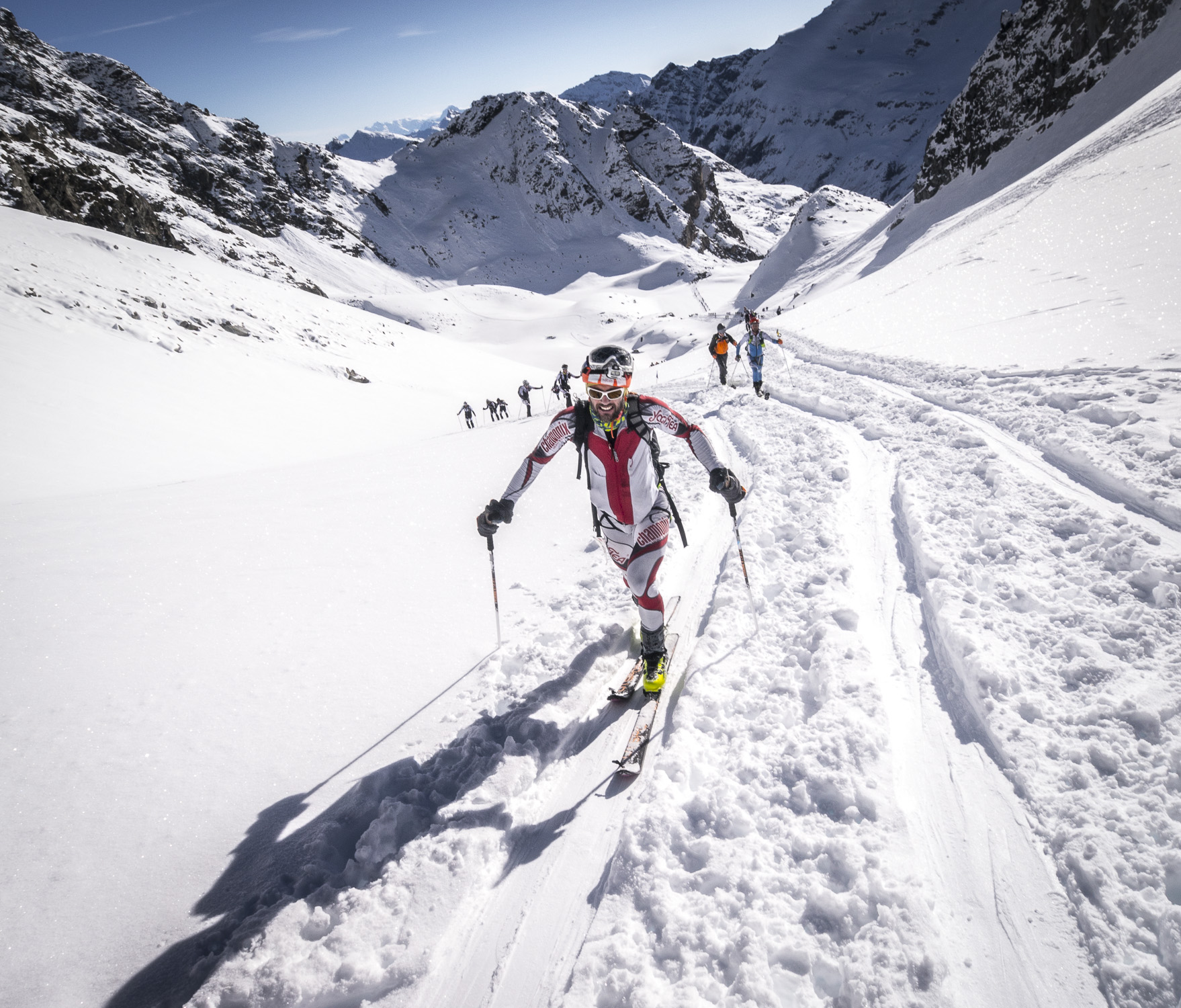 The final and most popular race of the Ski Mountaineering season has come around – the Patrouille des Glaciers, organised by the Swiss Army. The full course runs from Zermatt to Verbier, 4000m ascent over 53 km. It now attracts so many competitors that there are two separate days on which it runs (Z1 and Z2), and a shorter course departing from Arolla that is half the length on each day (A1 and A2). Our departure was the first day from Zermatt – Z1. Though planned for Tuesday evening, due to adverse weather it was rescheduled to Wednesday. 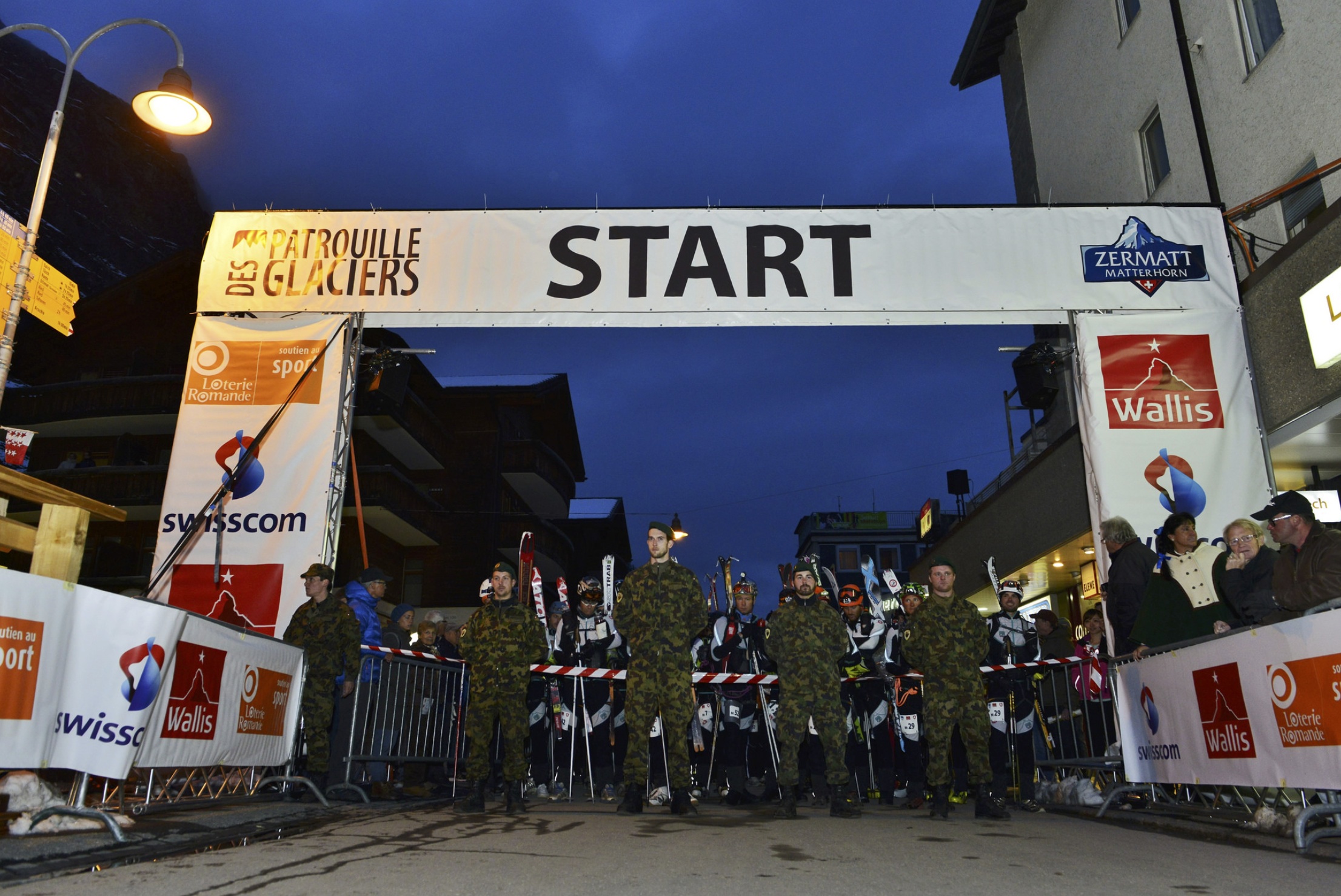 To complicate further there are rolling start times – as early as 9pm for those want the maximum time to get along the course without missing a time checkpoint, to 1am if you hope to be faster. We chose the latest start on Wednesday (Thursday morning 1am) to get to do some of the race in the light! 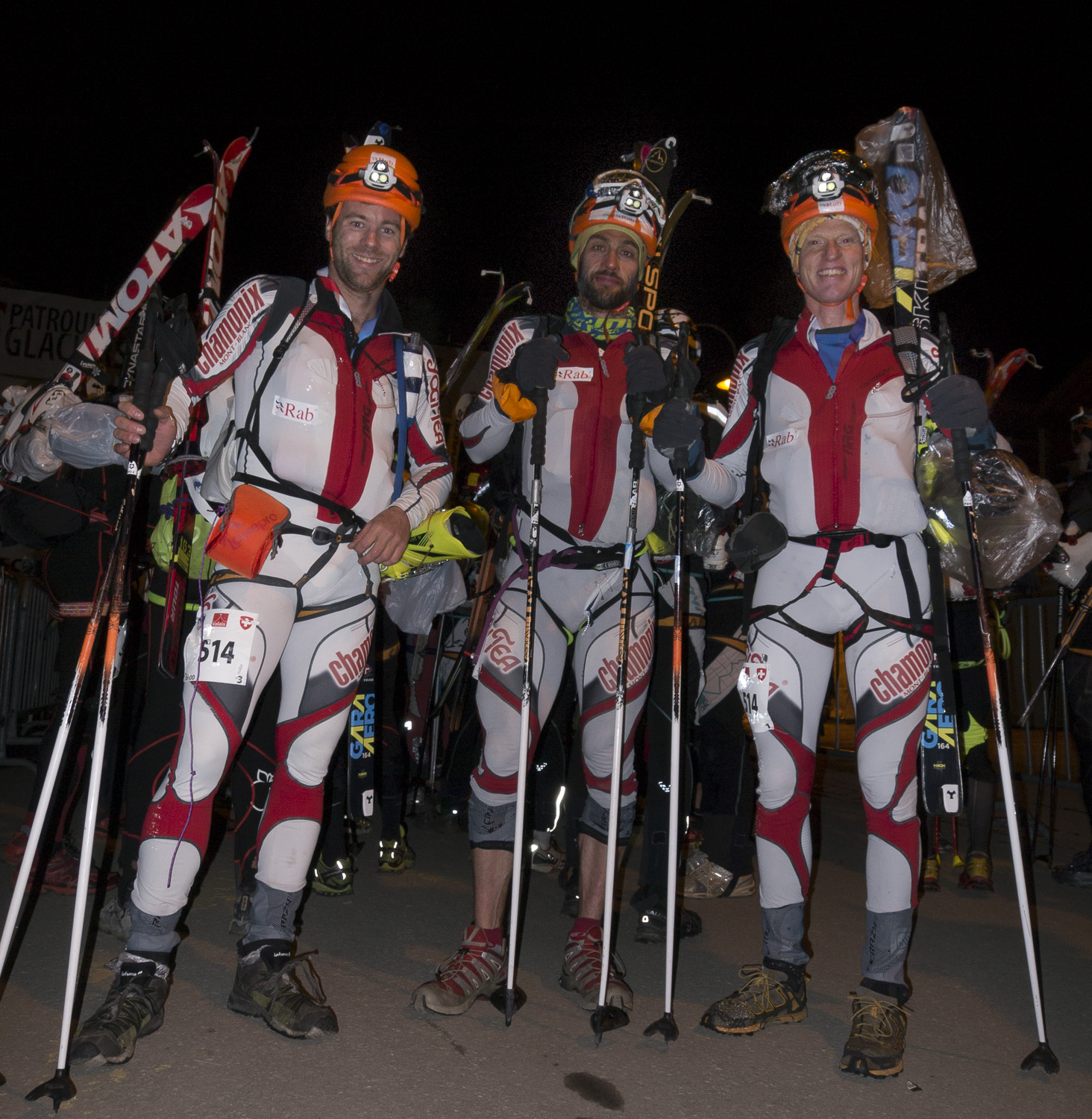 Team RAB – Myself, Ben Bardsley and Jon Morgan ready at the start line! 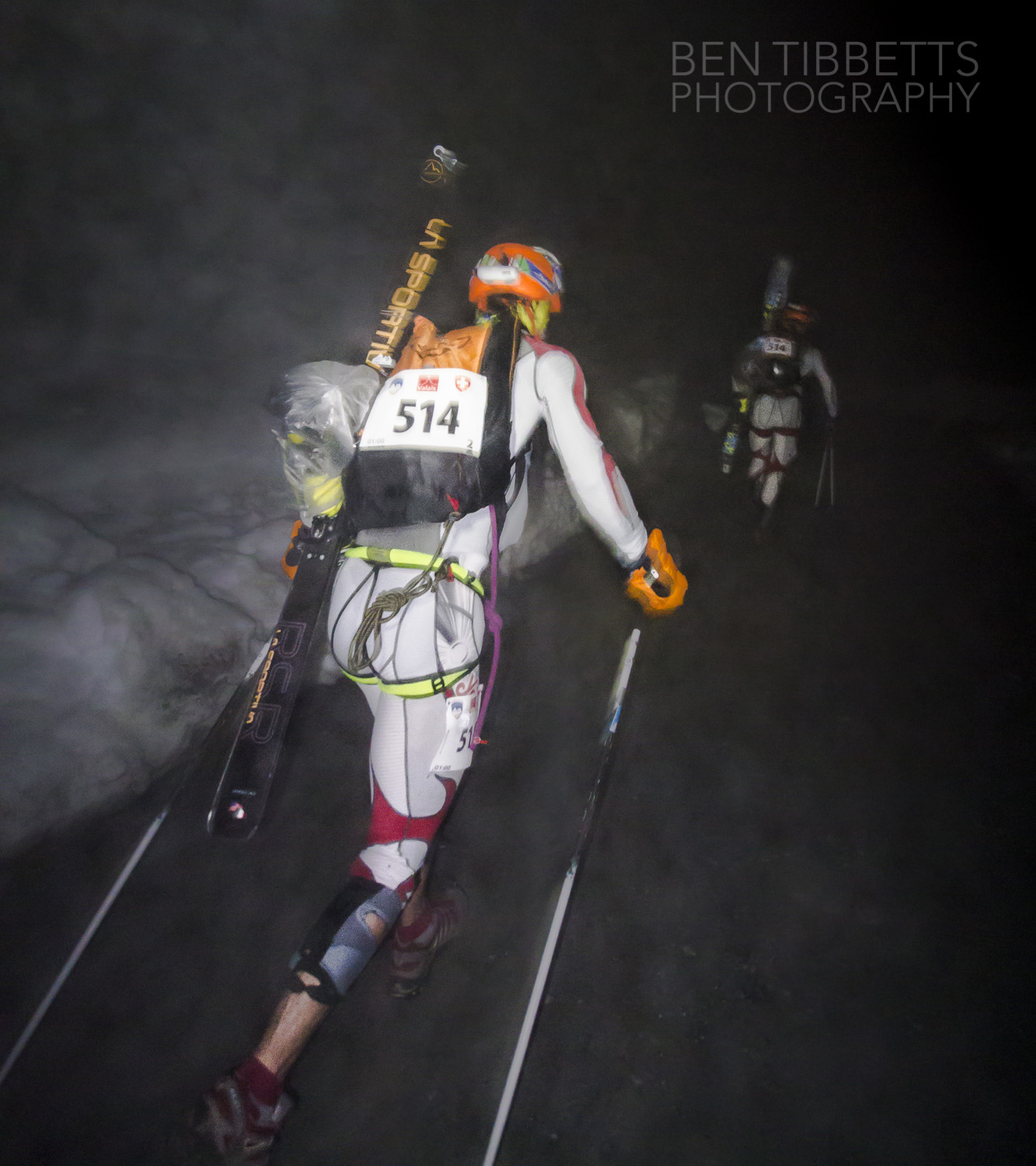 The first section of the race is about one hour gently uphill on snowy paths and is done in trainers with your skis and boots on your backpack. We were in dense fog and cloud inversion all the way to about 2800m. If you like running you might enjoy this bit. 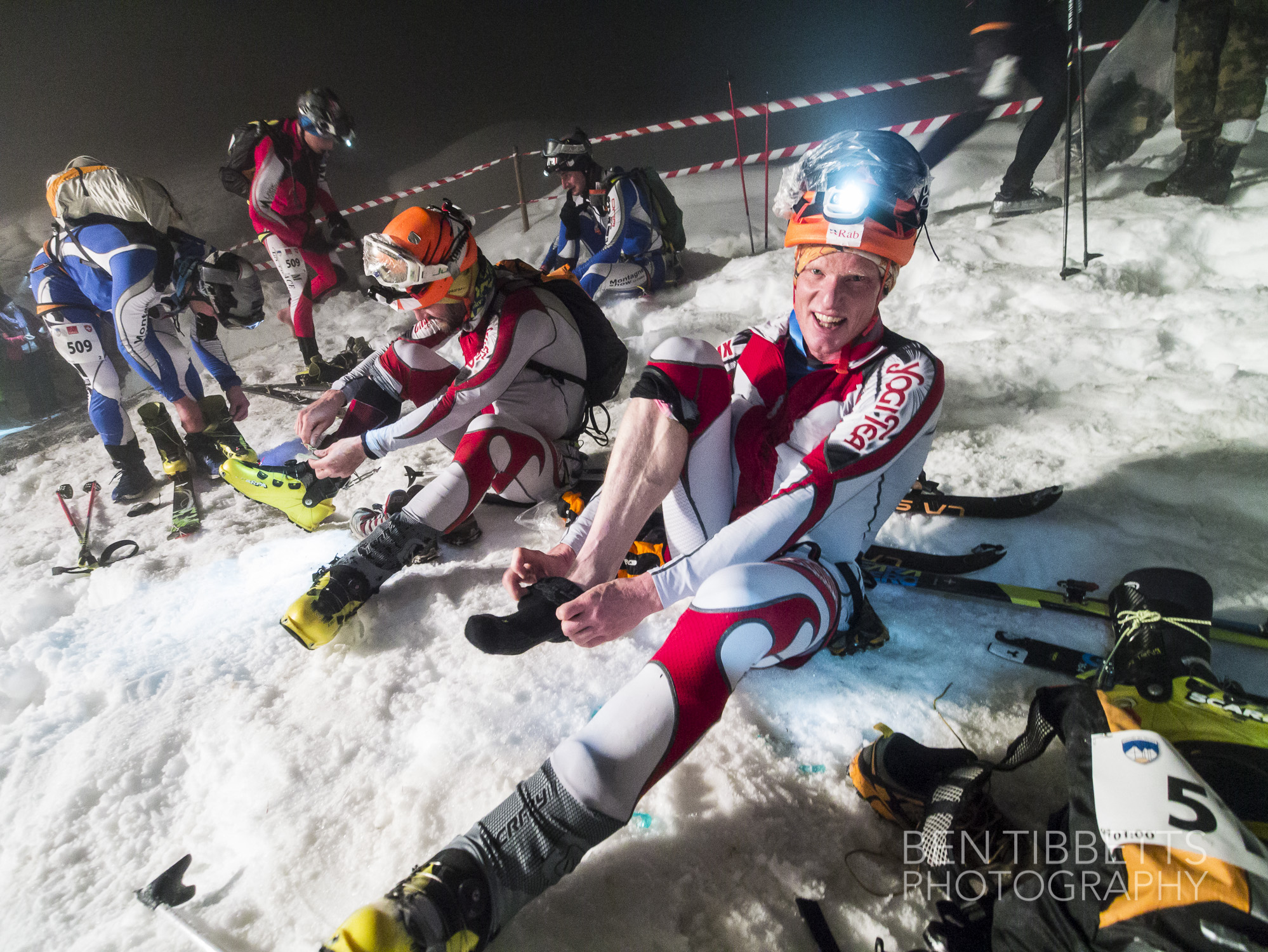 At Stafel you ditch your trainers (which go to charity…) and pull on ski boots, skis on and off you go. 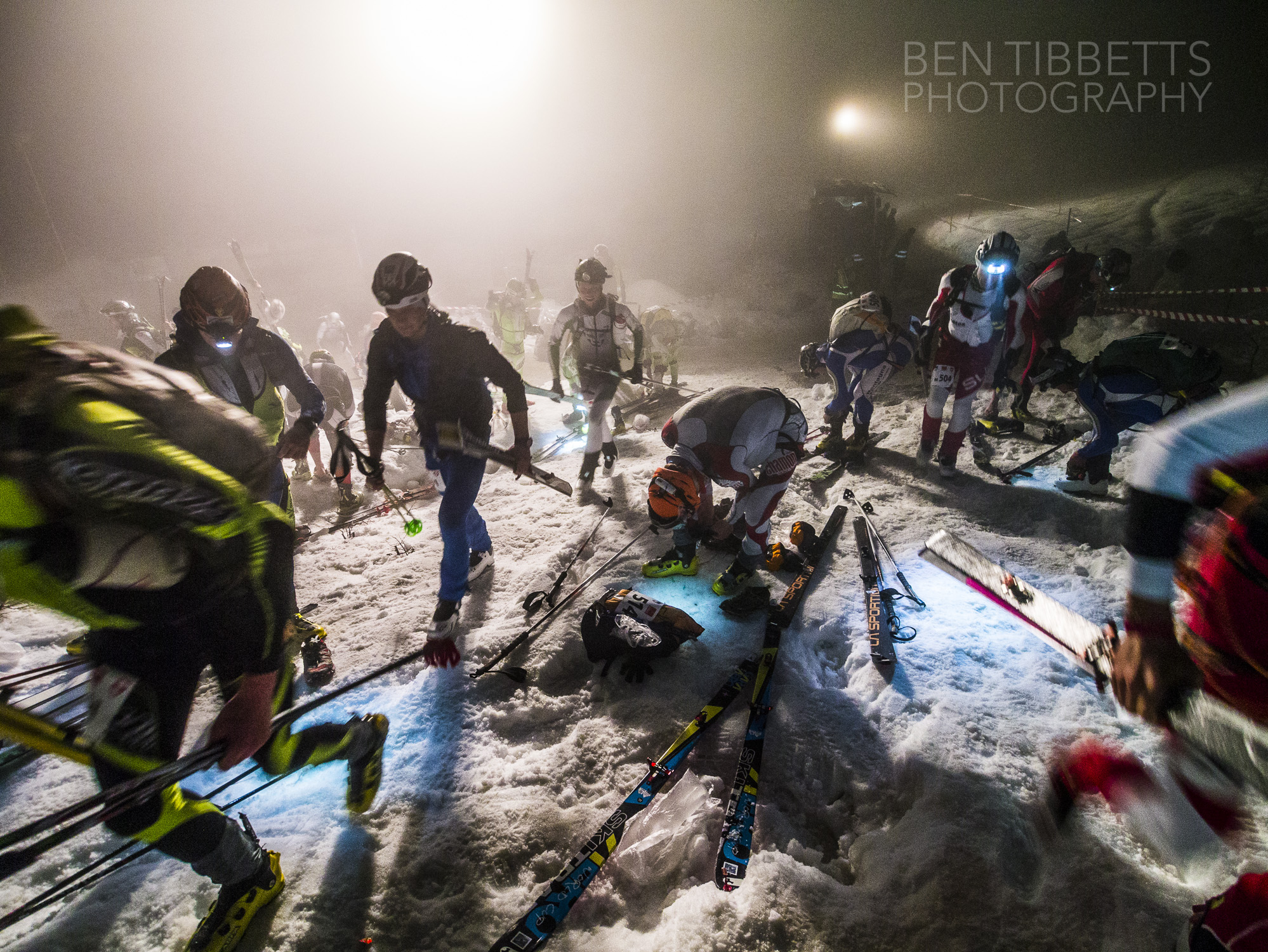 Stafel transition… in your own time boys… 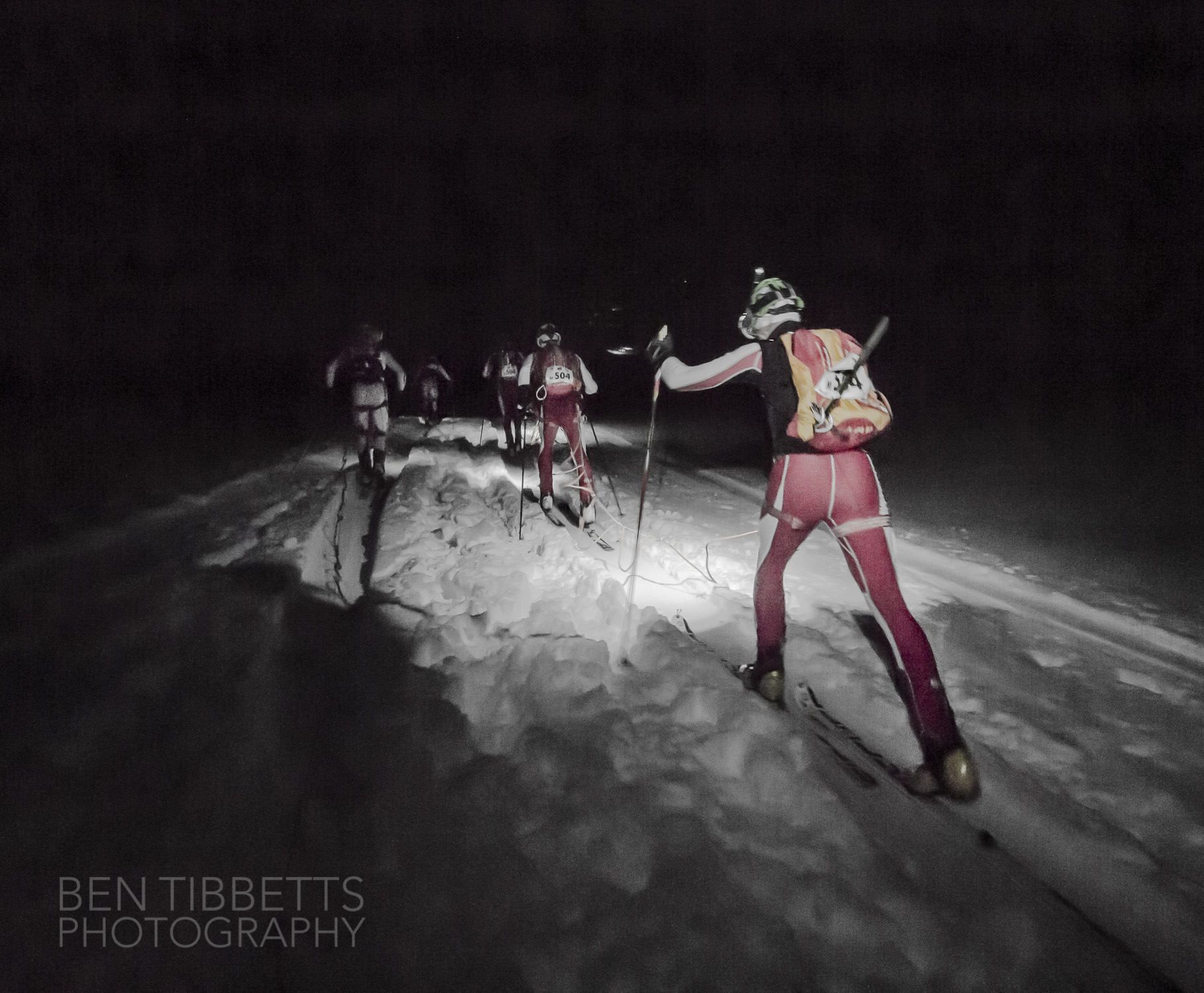 After another 45 mins or so we reached Schönbiel where you get into glacial terrain and are obliged to put a 30m rope on. Most people make a concertina system, attaching bungee elastic (5mm seems ideal) with finger tape every 50 cm or so. This is useful uphill to have less dragging on the ground, but really useful downhill where it is very easy to get tangled up in the rope otherwise.  From Schönbiel there is a long climb up the Stockli Glacier to just under the Tête Blanche at 3600m. With just a gentle breeze it was still very cold and I had to windmill my arms much of the way to keep any feeling at all!

The transition station at Tête Blanche looked like this a few hours later from a heli at sunrise!: 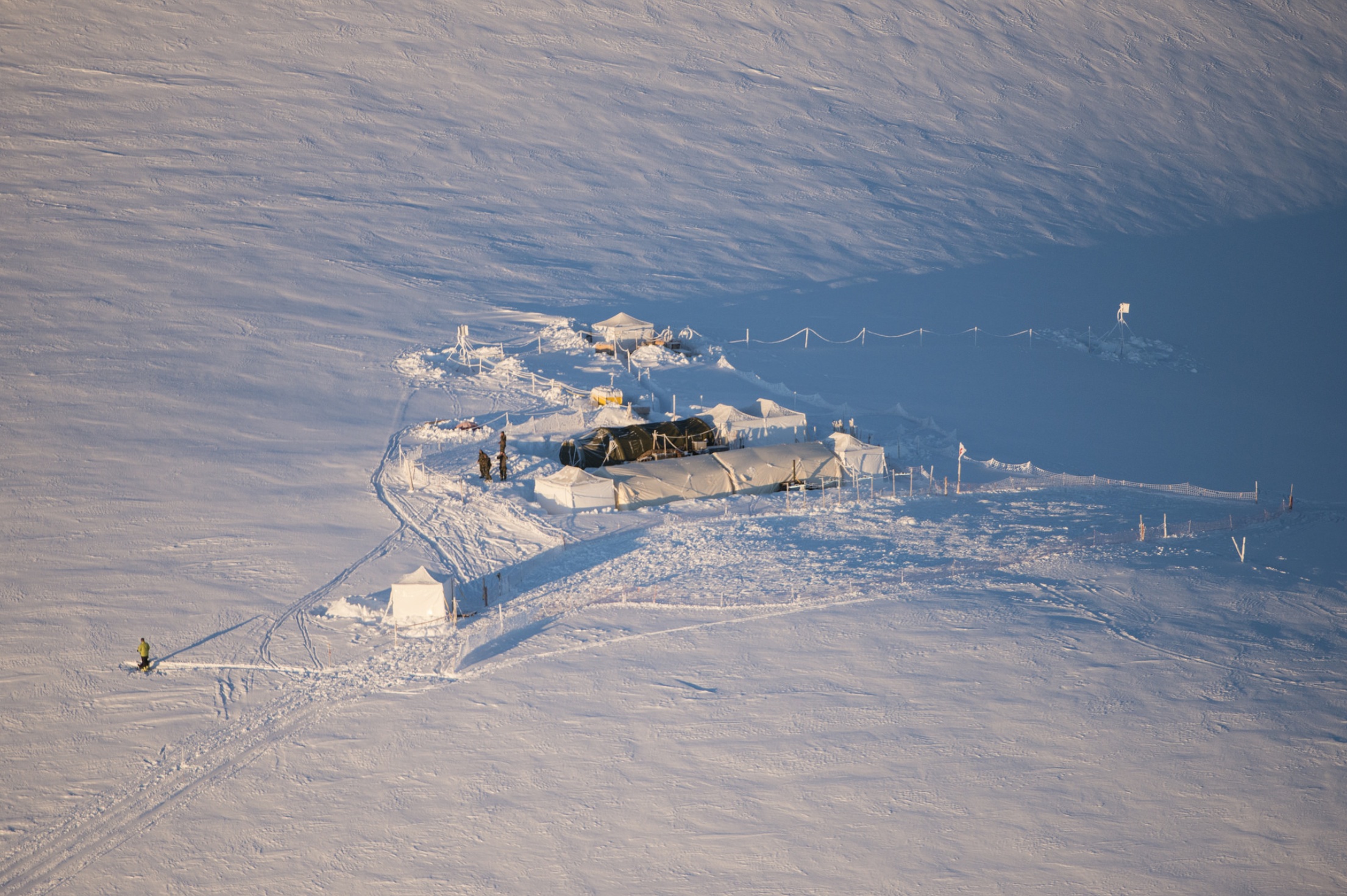 At the Tête Blanche skins came off, rope stayed on and we whizzed downhill towards the Col du Bertol. Jon is the most experienced skier so took the middle of the rope. This means you have no control getting pulled over forwards or backwards by your buddies! 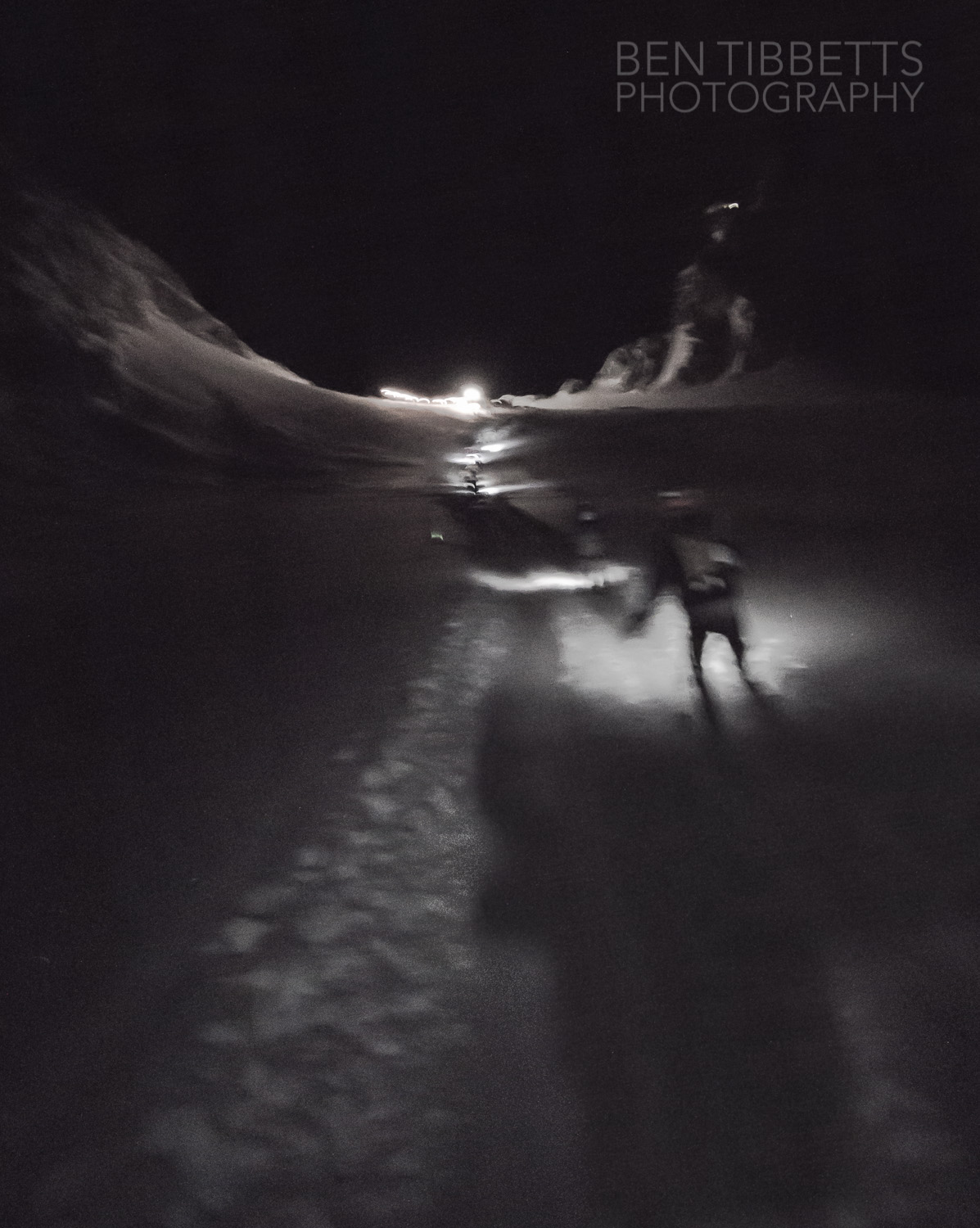 Just below the Col there was a short skin up before the long ski down to Arolla which marked the halfway point. There was lots of fresh snow lightly covering loads of rocks on this descent and we were still in total darkness. Even with strong headtorchs you can’t see much other than lots of shadows in front of you. I totally trashed my skis… ho hum. 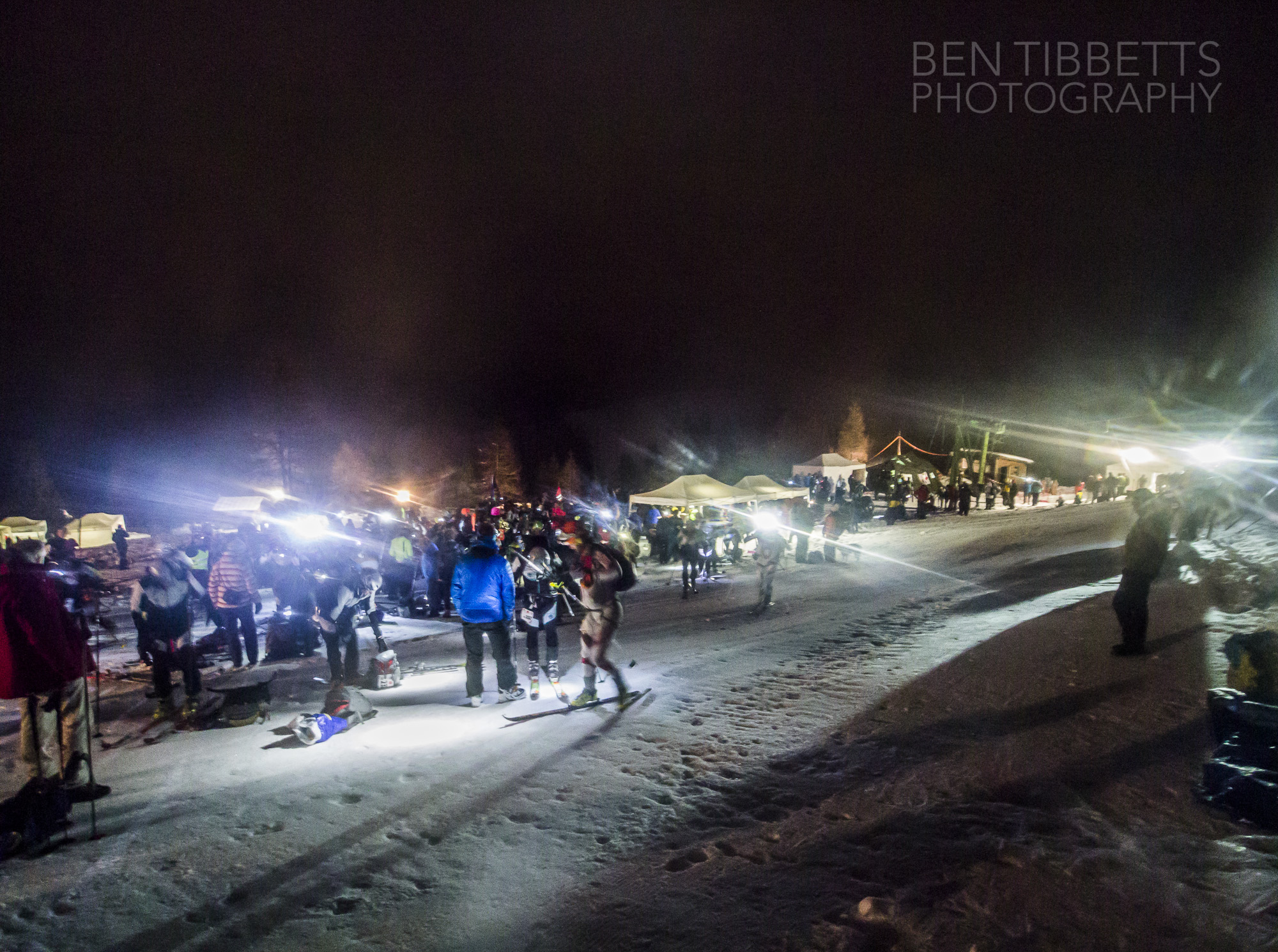 …you get some hot tea and dried fruit, but best press on and not waste too much time. From here on there are double the amount of people on the course as another 1400 people start here! Chaos. 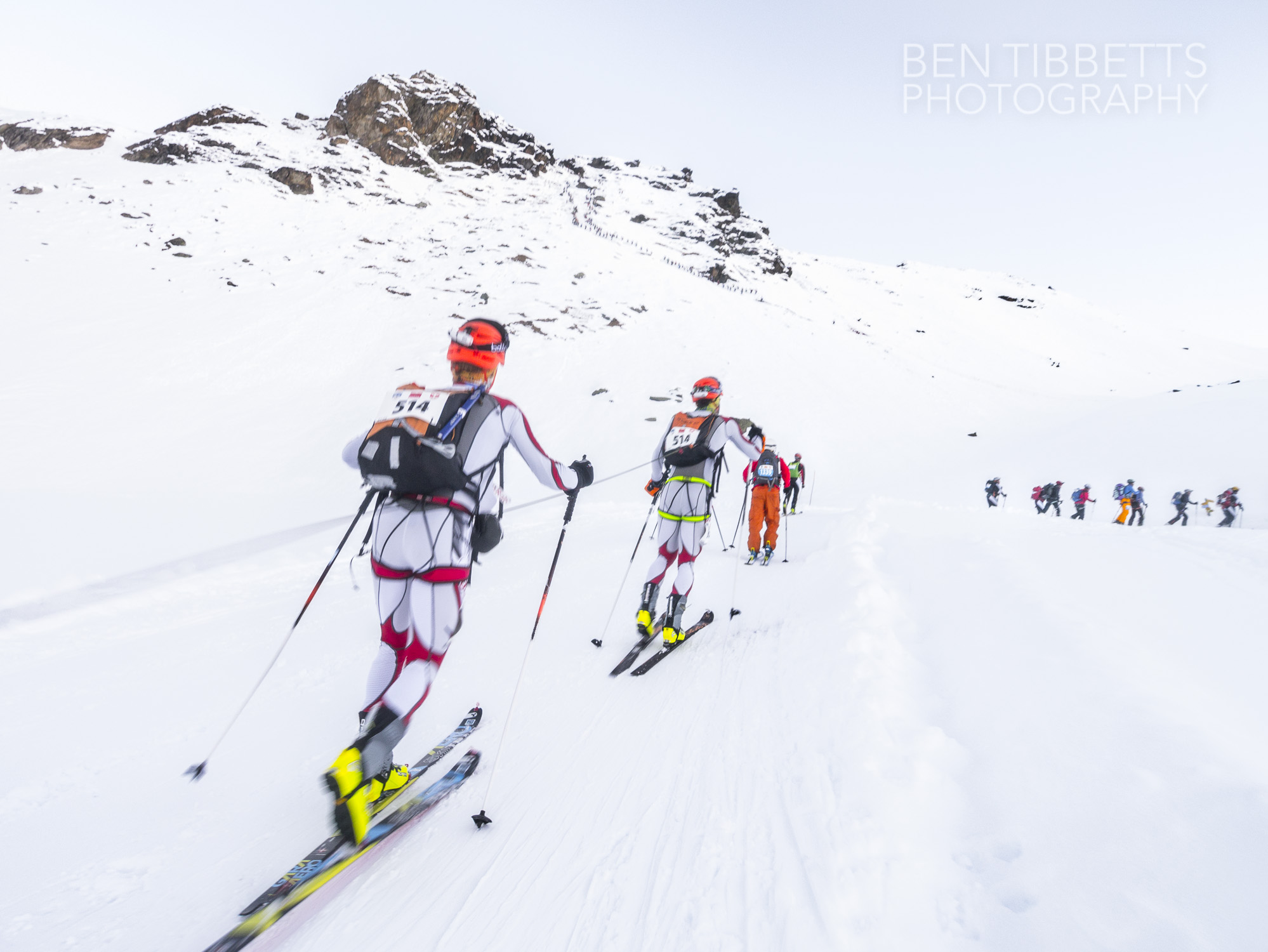 BB tows up the Arolla pistes!

After Arolla we skinned up the icy piste then to the base of the Col de Riedmatten. BB had excess power so Jon and I attached to him with two bungees in series to stop him popping off the front! Beast. Just before the boot-pack up the steep slope to the Col there were such a lot of people that the military organisers were stopping everyone to let the path clear. We had to wait about 10 minutes which was pretty chilling and frustrating, though it probably happened to everyone. 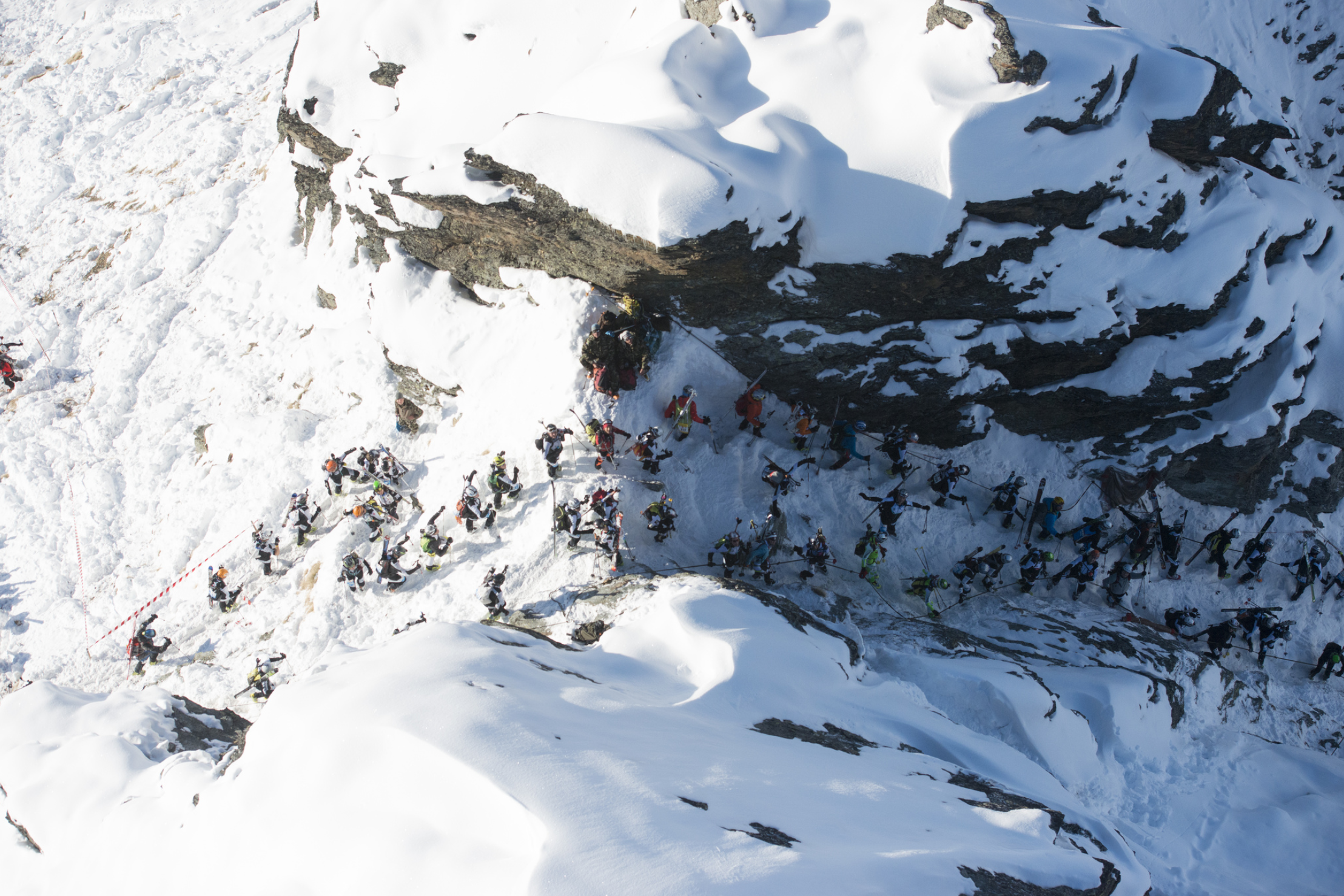 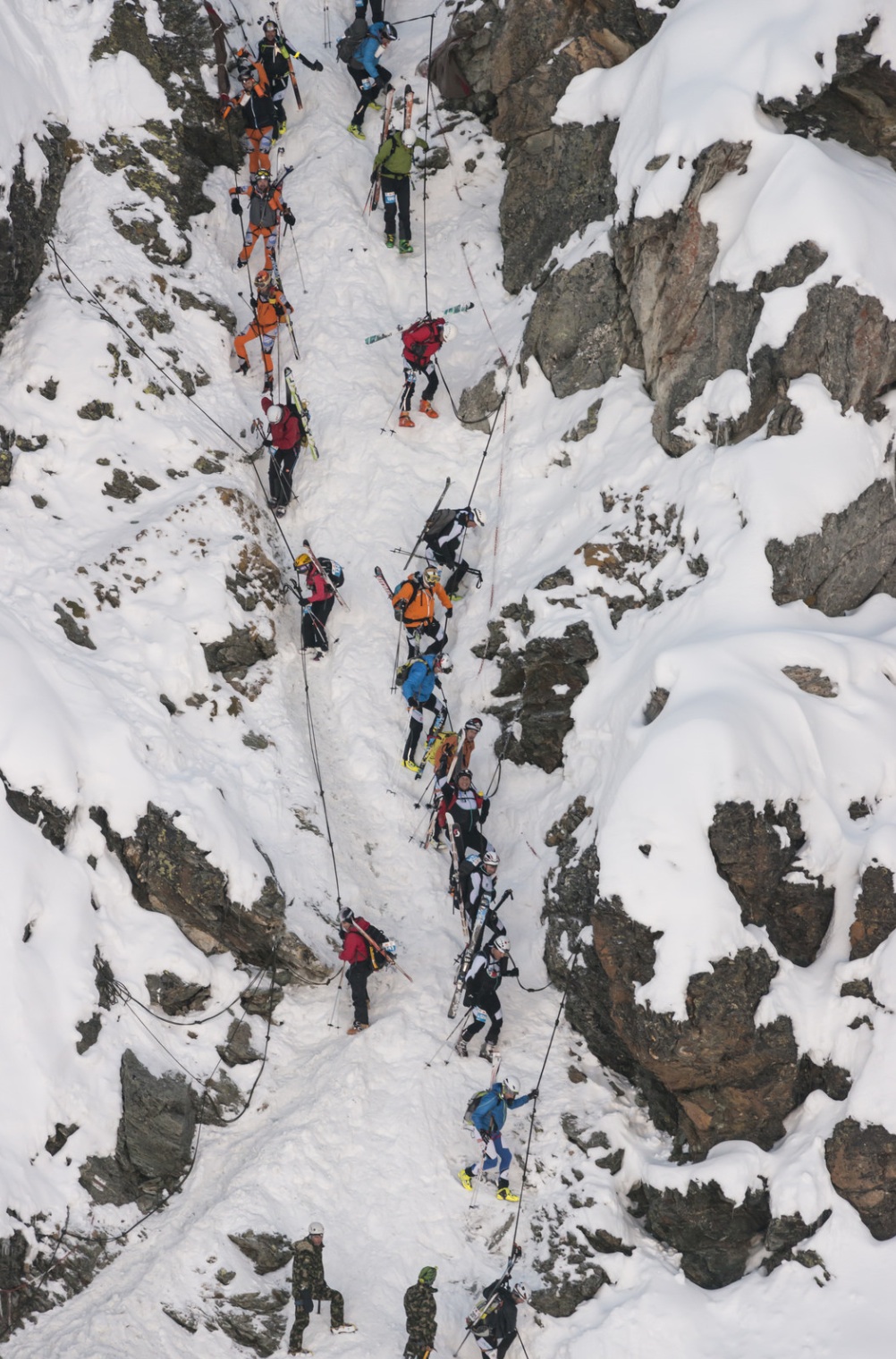 Descending the other side of Col de Riedmatten –  © JUERGKAUFMANN.COM / PDG

As nearly a metre of snow fell high up the day before the race it is hard to imagine how much work went into avalanche control with explosives etc. Below is an image of them working in the weather the day before to make the course safe. It must be no joke for the PDG Commander, Max Contesse, to decide whether or not to let 2 x 2500 competitors race semi naked through the mountains under his responsibility: 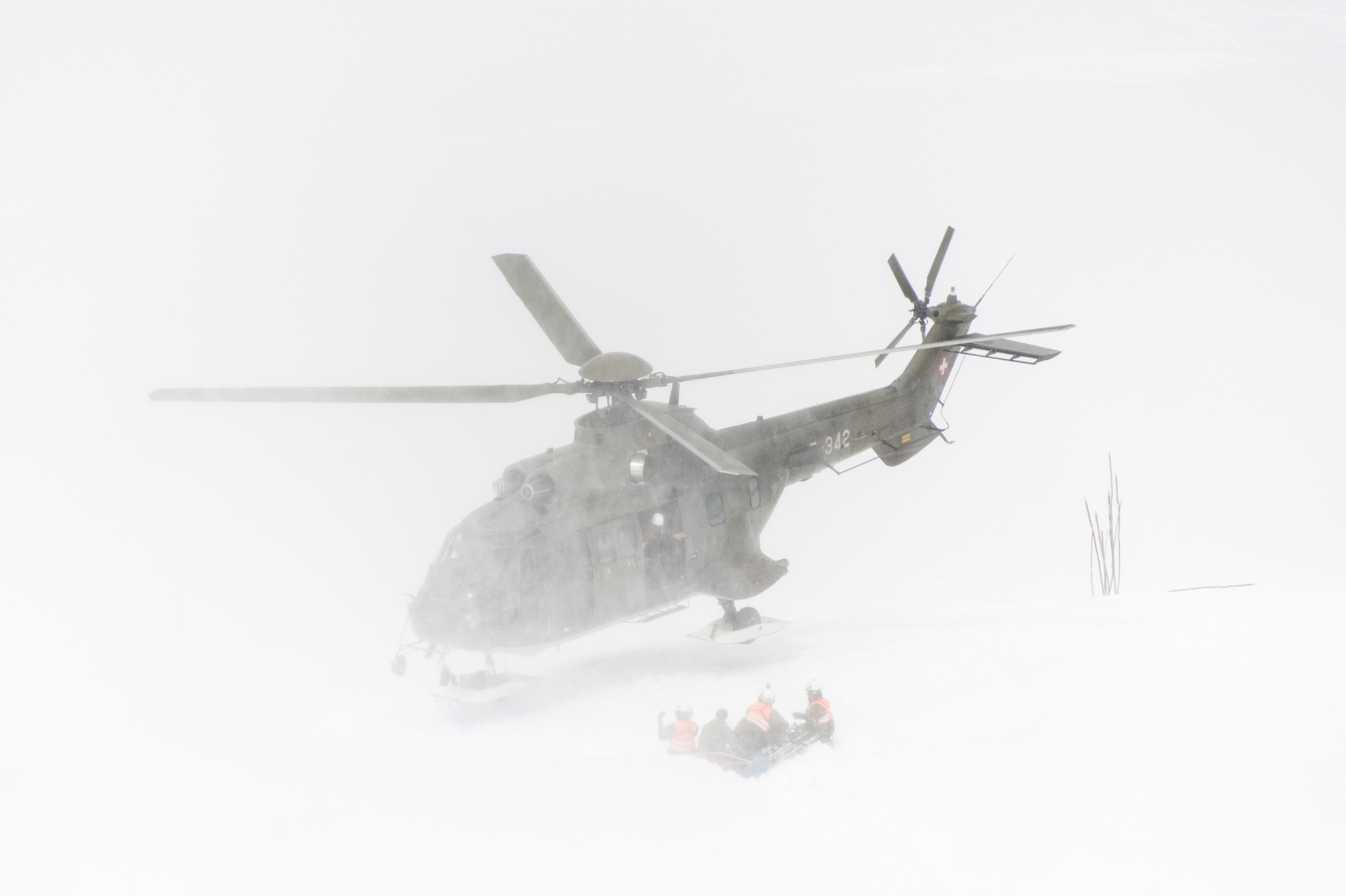 After the Col de Riedmatten we traversed round the Lac des Dix, a brutal section that is only very slightly uphill. It is quickest to skate rather than skin, but on a sideways slope and with lots of people going at a different speed it is very tiring work! After the Lac is the second feed station at La Barma. I arrived dizzy and dehydrated, so filled my bladder with a litre of sweet tea before heading off again. I felt wrecked so got a bungee tow off Jon for a bit whilst BB took the weight of the rope we used earlier. At some points in these longer races it often seems impossible to keep trying hard. Usually the body can handle it, and it is just a mental game. Working in a team helps get everyone through their dark moments… 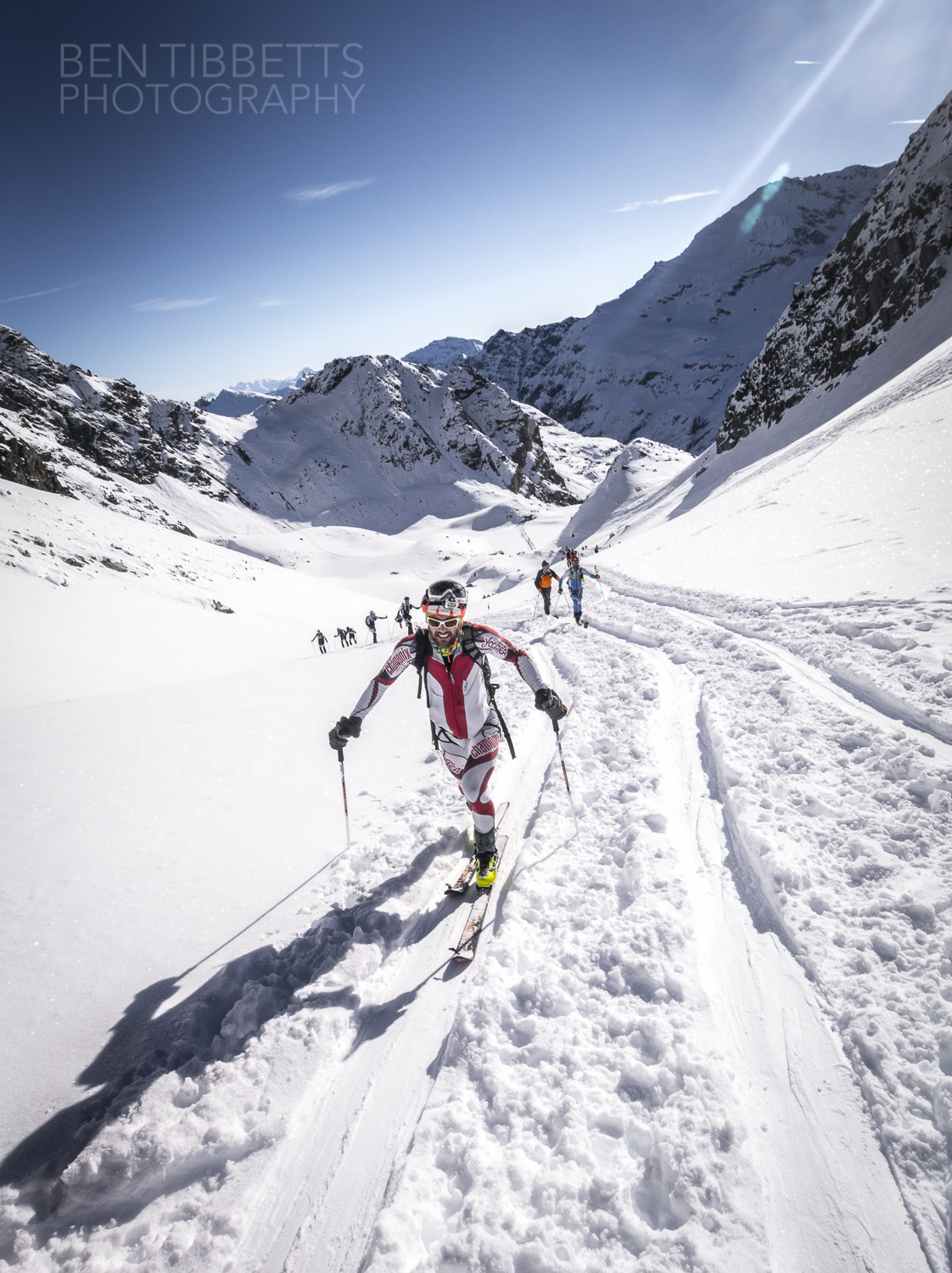 BB charging up the last climb to the Rosablanche 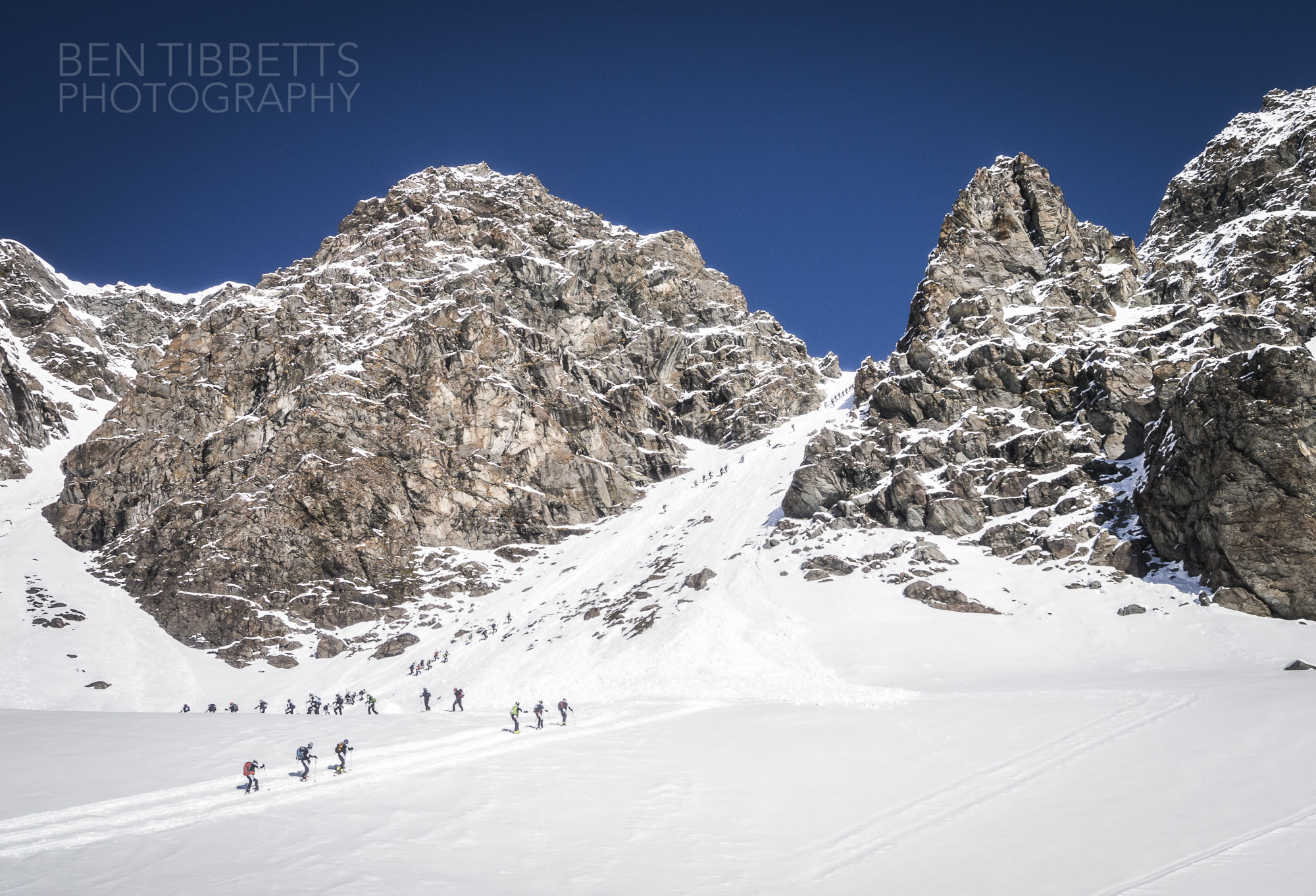 On the last big climb up to the Rosablanche plateau we came into the sun. I took a caffinated ‘Torq’ gel which is tantamount to doping, and gave me back my wings. The last section of Rosablanche was another long boot-pack where it soon felt pretty hot. We had no idea for the whole race how we were doing as there are thousands of people all over the course. We only knew that we had passed most of the ‘500s’ numbers that had started with us, and as this was the latest start time, this was a good thing. We caught another 500s team on the boot-pack, and urgently rushed off the last descent and climb to Col de la Chaux and the pistes of Verbier resort. The last descent was fast and sweet, but the finish was about 1500m of running which finished me off! 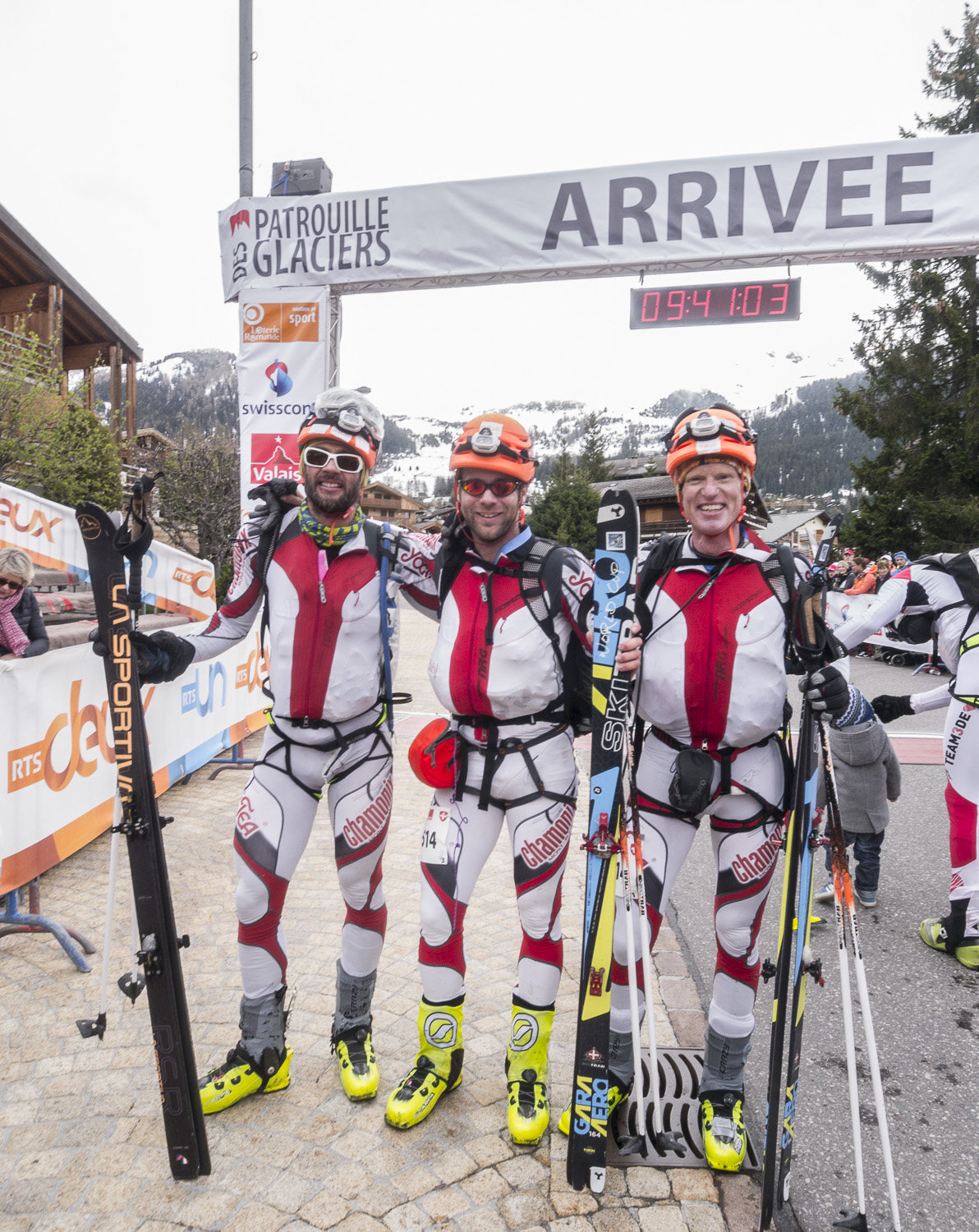 Our bulging skin-suits are full of skins, gloves etc. if you were wondering!!

Turns out we came 1st in our category (civilian men seniors), 2nd civilians and 3rd overall… who would have thought it!

Thanks to Rab for all the support! 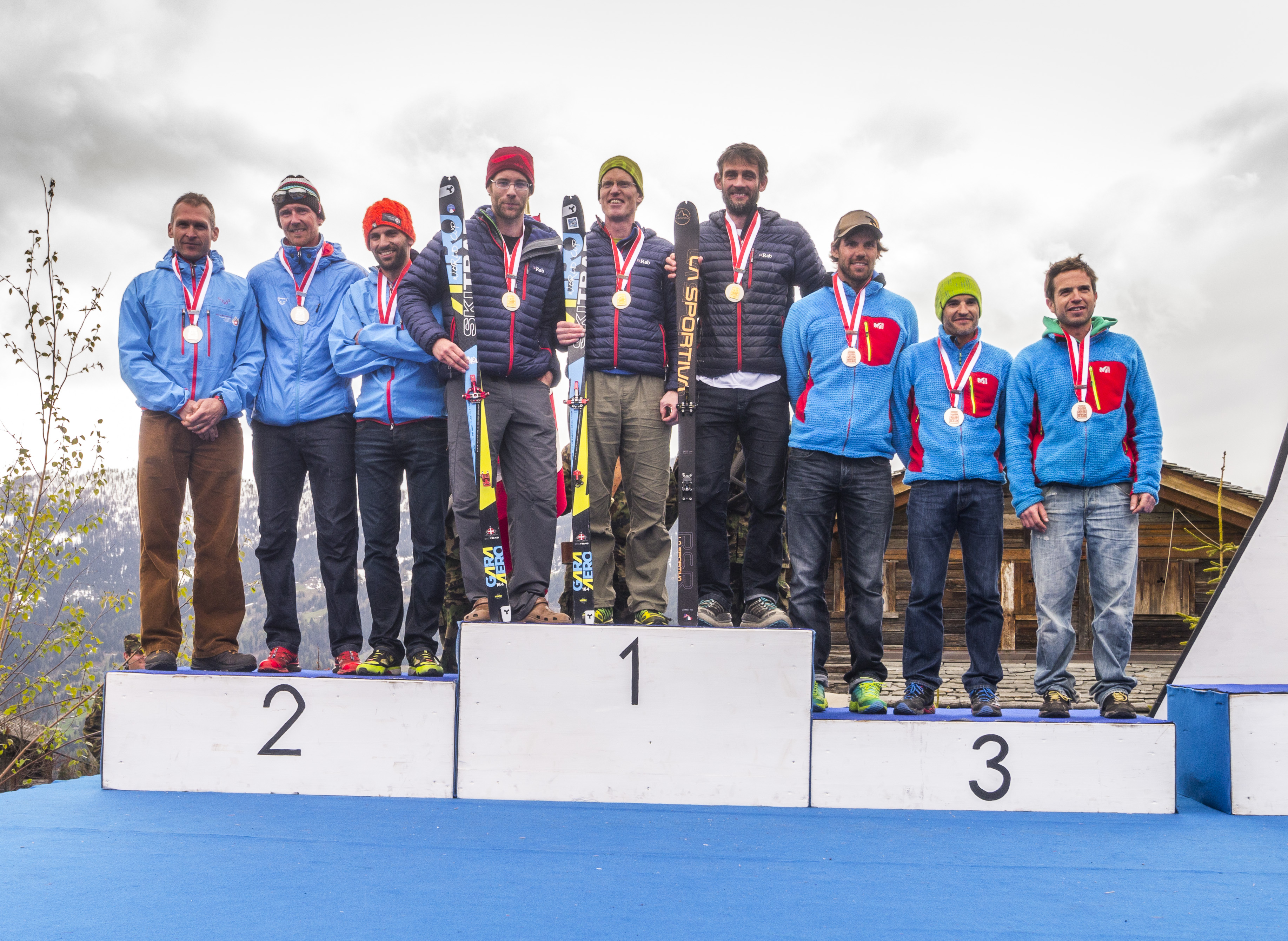