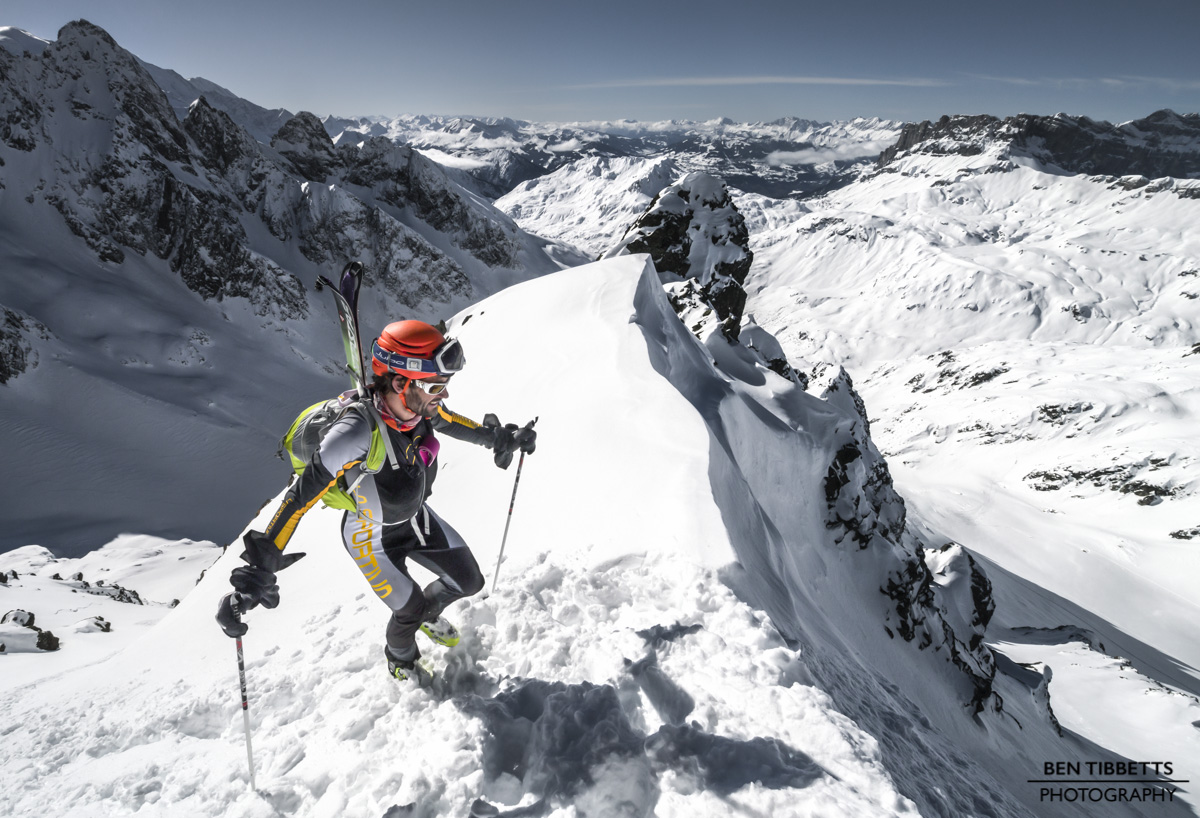 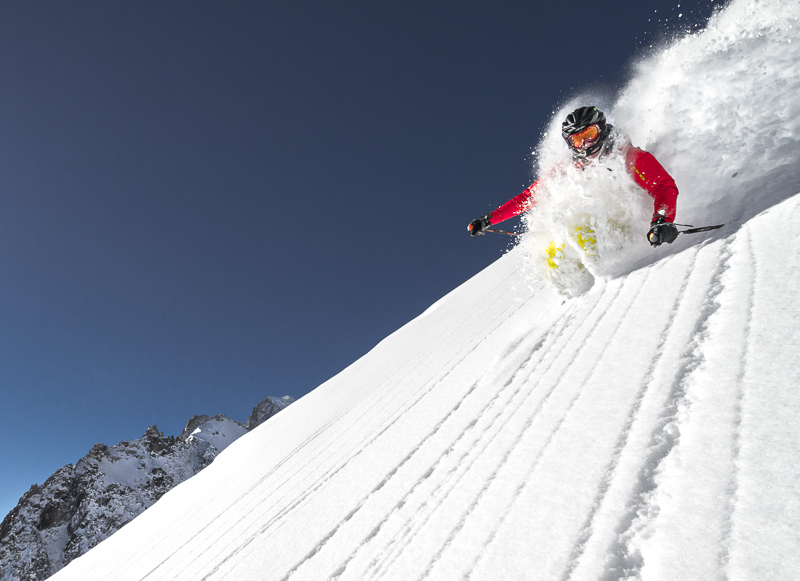 Though I am spending most of the winter in Scotland guiding and training for the BMG winter test, I had planned since the beginning of the winter to head back to the Alps for the SkiMo European Championships in Andorra. I went out to the Alps a week early to catch the Tournette Sambuy Millet 2 day race the weekend before, then some acclimatisation in the week leading up to the Euros. Misha picked me up from the plane and we drove directly to the hotel for a 7am race start on the Saturday morning. The TS Millet had proposed an exciting and ambitious two day race for teams of two, but was blighted by bad weather, avalanche risk and rather uninspiring ‘B’ courses. Misha and I had a catastrophe of gear failures including a broken pole and several skin problems over the weekend … all good learning though! Lots of other British teams put in good performances – Ben Bardsley and Carron Scrimgeor came well up in the head of the field. Es Tresidder and new kid on the scene Findlay Wild came in not far behind. Ally Swinton and Stuart Johnstone thrashed round the course just behind us having their own share of learning!

Coming back to Chamonix felt great and I got two very special days of powder skiing under clear skies. As this winter hasn’t been especially generous, even in the Alps, I felt fortunate to be out in the sun with friends. On the Tuesday Misha Gopaul, Carron Scrimgeor, Ben Bardsley, Sylvie Drouillat and I headed up the Aiguille du Midi after heavy snowfall overnight. We went down the Petit Envers variation of the Vallée Blanche on pitch after pitch of cold deep snow, which nevertheless needed to be treated with caution on steep slopes and ridges. 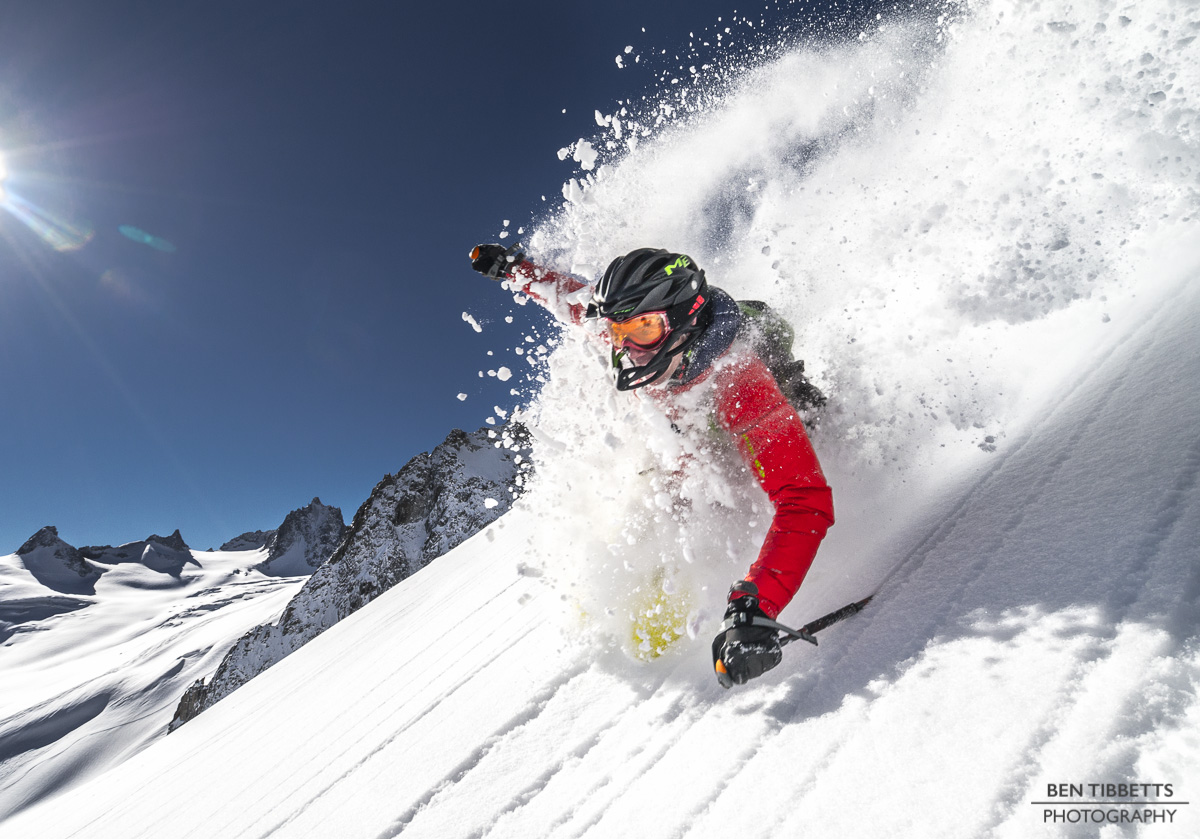 Carron Scrimgeor on the Petit Envers 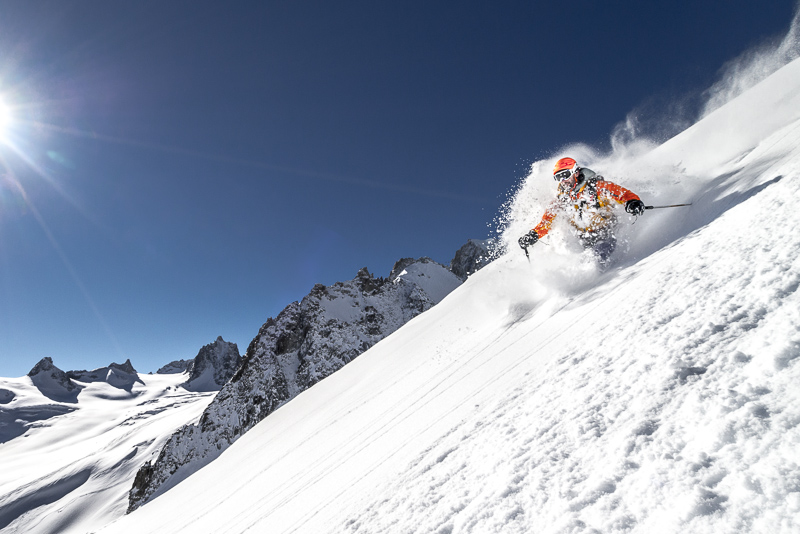 Ben Bardsley on the Petit Envers

Lower down there were quite a few rock sharks still knocking about past the Requin hut, and then more so on the exit snout of the glacier by Montenvers. After battering the skis up a bit it was surprising then that the ‘James Bond’ track back to Chamonix had a good base in and skied well to the valley floor. We went straight back up for a second lap, this time by the Gros Rognon variation which still had ample space for dozens of fresh tracks.

On Wednesday Ben, Carron and I headed up  into the Aiguilles Rouges. We went up via Flegere, skinning from the bottom as there was a huge queue for the telecabin, up over the Col des Aiguilles Crochues. Having considered several options we headed up the steep gully towards the Pointe Alphonse Favre and the Glacier Mort. 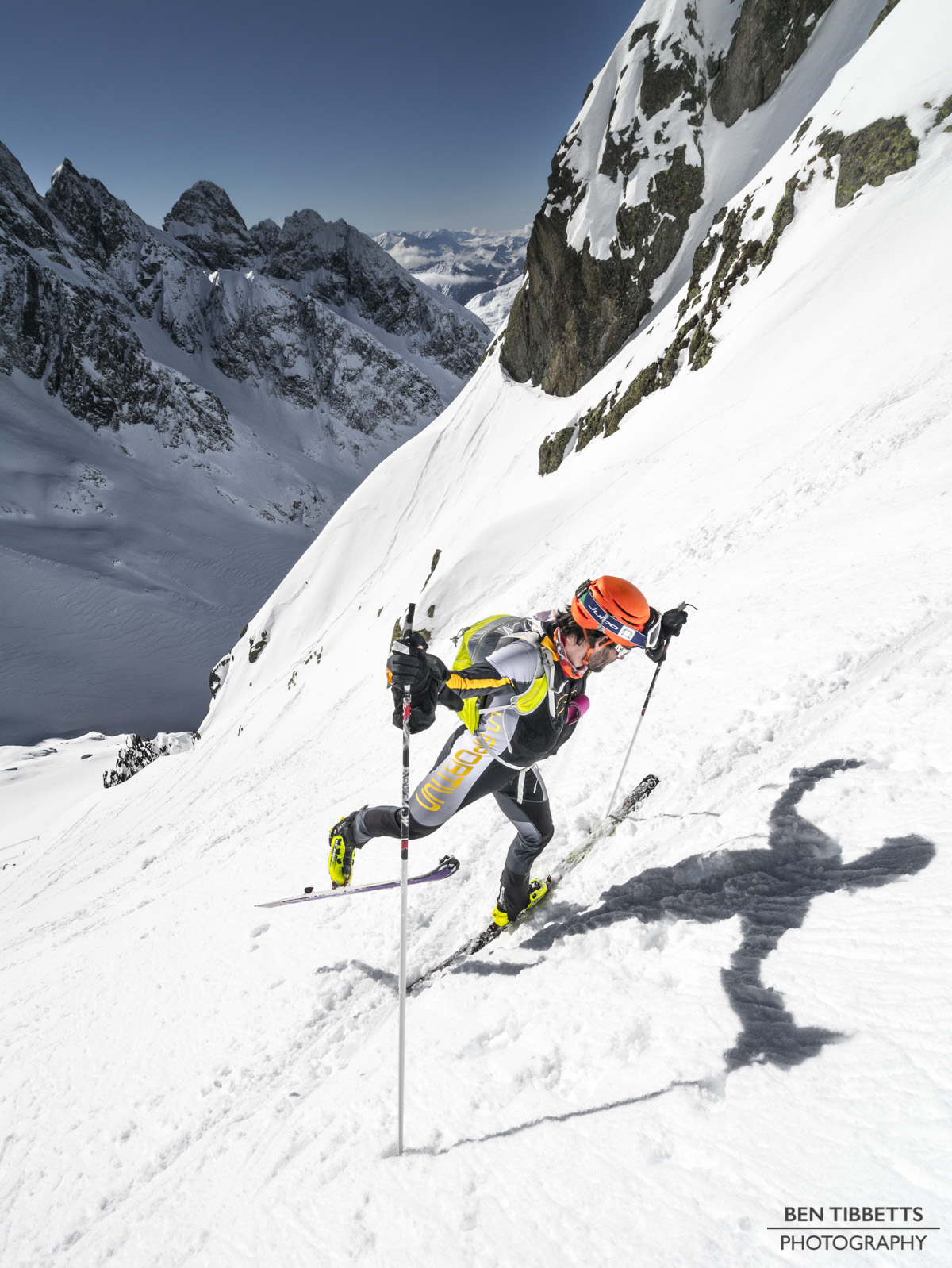 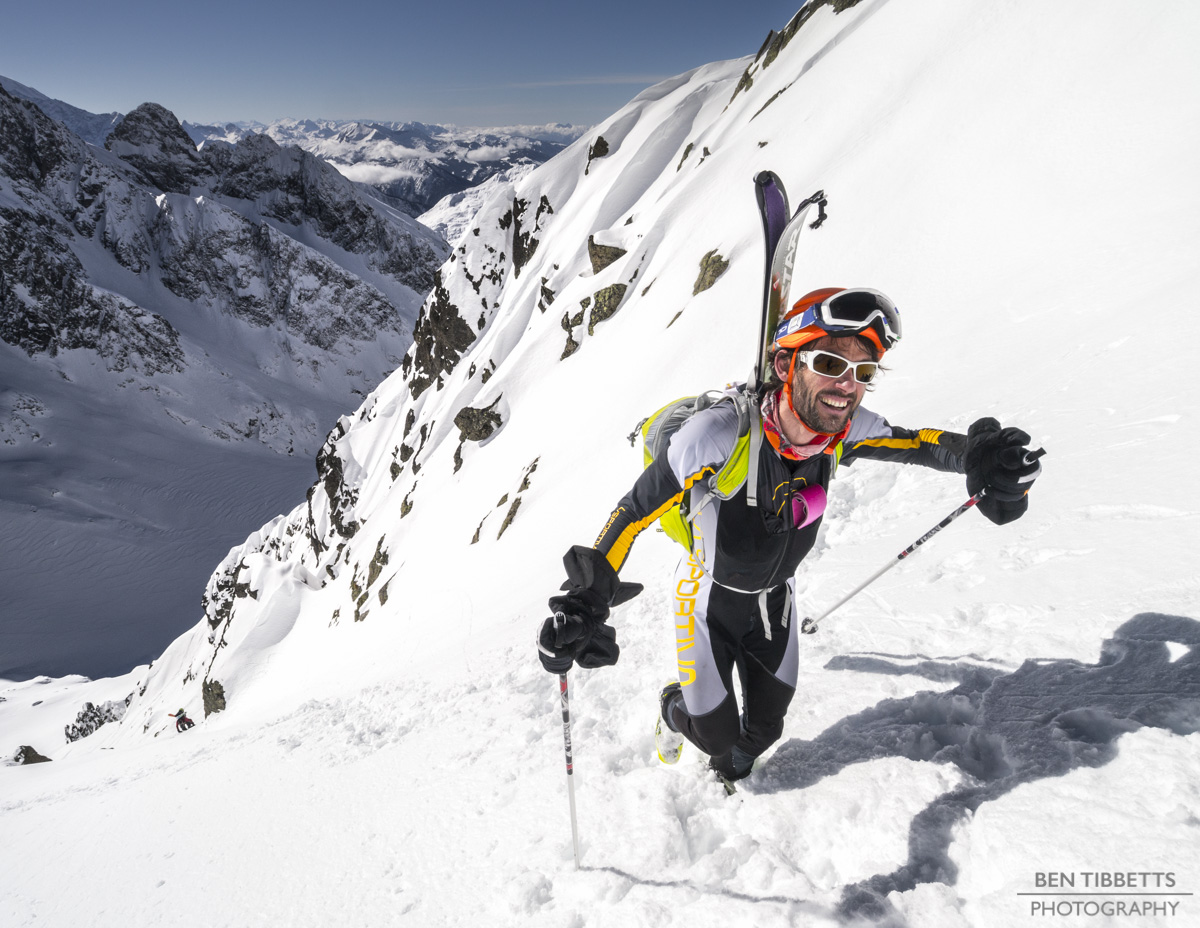 I had never been up this route before but Carron assured us that we didn’t need axe or crampons. The final section of the boot pack up the ridge was however severely stripped by the wind and snowy rock slabs felt precarious in ski boots. The north facing descent held more delicious cold snow, and only four tracks. In some sections the snow had loaded in unstable soft slabs and despite being a small group we had to manage ourselves carefully down pitch after pitch. Thankfully the line lends itself to this and most of the steeper sections are short. 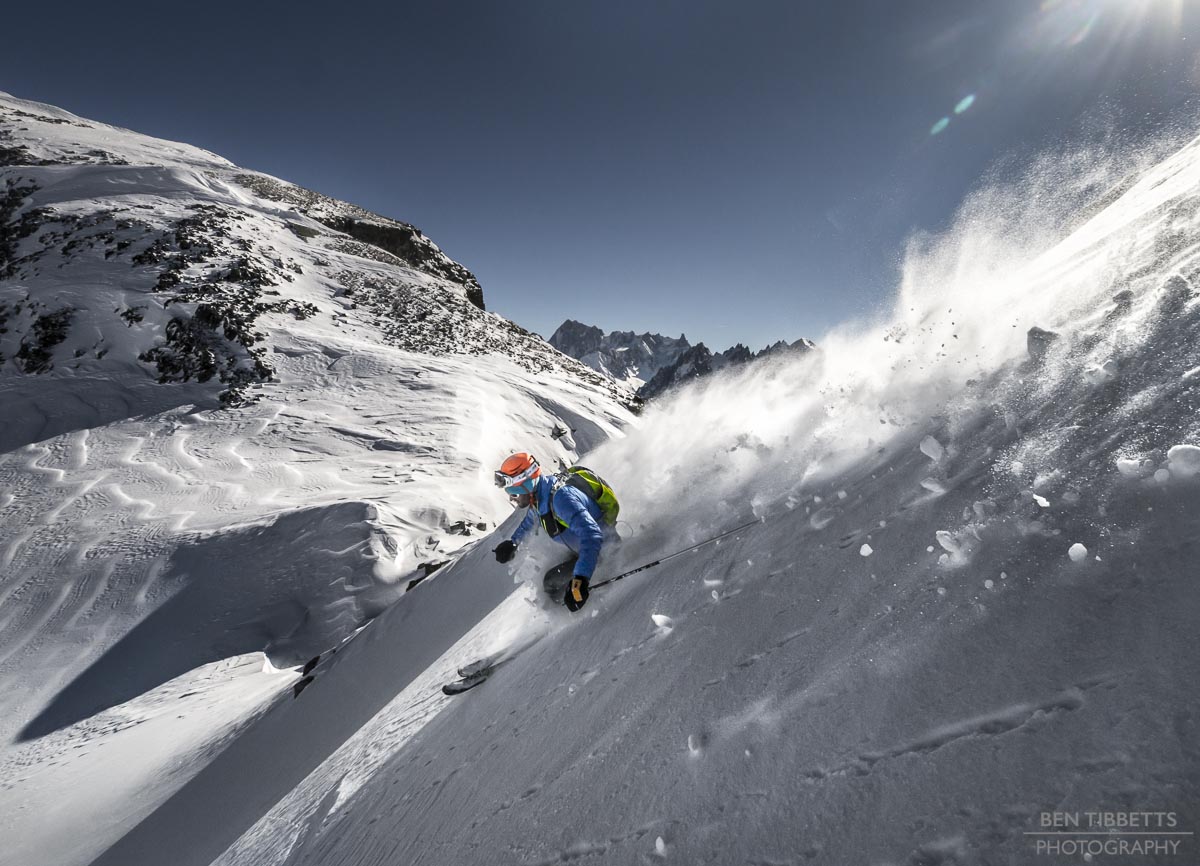 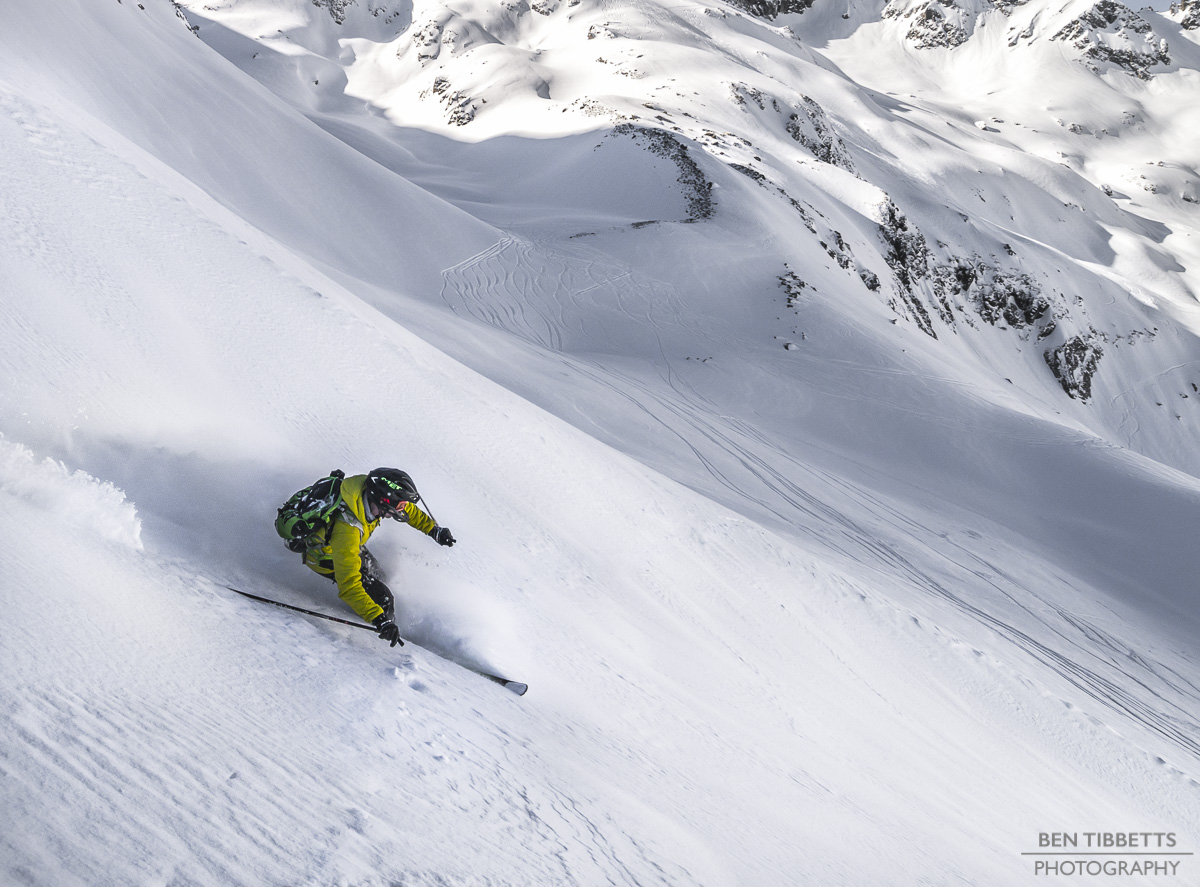 The European Championships is one of the culminating events in the SkiMo race calendar. With each nation only able to send 4 athletes male and female to each race, the field of competitors is small and the level is outrageously high. Though none our team (Ben Bardsley, Ivor Ligertwood, Misha Gopaul, Janine Frost and myself) had any pretensions of winning, it is a great to be a part of the international community, and step up to the line against some of the greatest athletes in the sport.

The first race was race the ‘Vertical’ on the Friday at Arinsal – a 730m uphill only race over 3.2km. The sun was shining, and despite wearing only a one piece lycra skinsuit most folk were overheating. It was fast, and brutal with the winner taking only 27 minutes…

Watch the 1,2,3 winning Italians collapse as they cross the line… I think it was the same feeling for everyone. As I had suspected, walking slowly up small Scottish hills at sea level wasn’t the perfect preparation for a race against the worlds greatest ski mountaineers at altitude. I also had had a chest cold for about 2 weeks, thus despite suffering to the max I couldn’t push as hard as I would have liked. On the Saturday we rested and went out for only a few hours to recce the course for the main event, the ‘Individual’ race at Arcalis on Sunday:

This race was more my style, and even had some crappy Scottish weather to boot! The course had 1920m ascent over a relatively long distance and 15 transitions between skinning, bootpacking and skiing! William Bon Mardion won with a time of 1:55. It is humbling as ever what these guys can push out. Normally a race of this height gain would have had a much quicker time, but this attests to both the difficult conditions and technical complexity of the course. Considering the inclement weather it was surprising the organisers stuck to such a serious and technical route – 7 out of the field of 55 senior men didn’t finish. From the start line I felt dizzy and nauseous, though this seems fairly normal. After 30 minutes or so I got into the groove and picked my pace up a bit and pushing harder. After the first long climb, there was a downhill traverse, then skins back on for another climbing traverse, then a long descent back into the resort. The snow was deep and playful, though visibility was very poor. 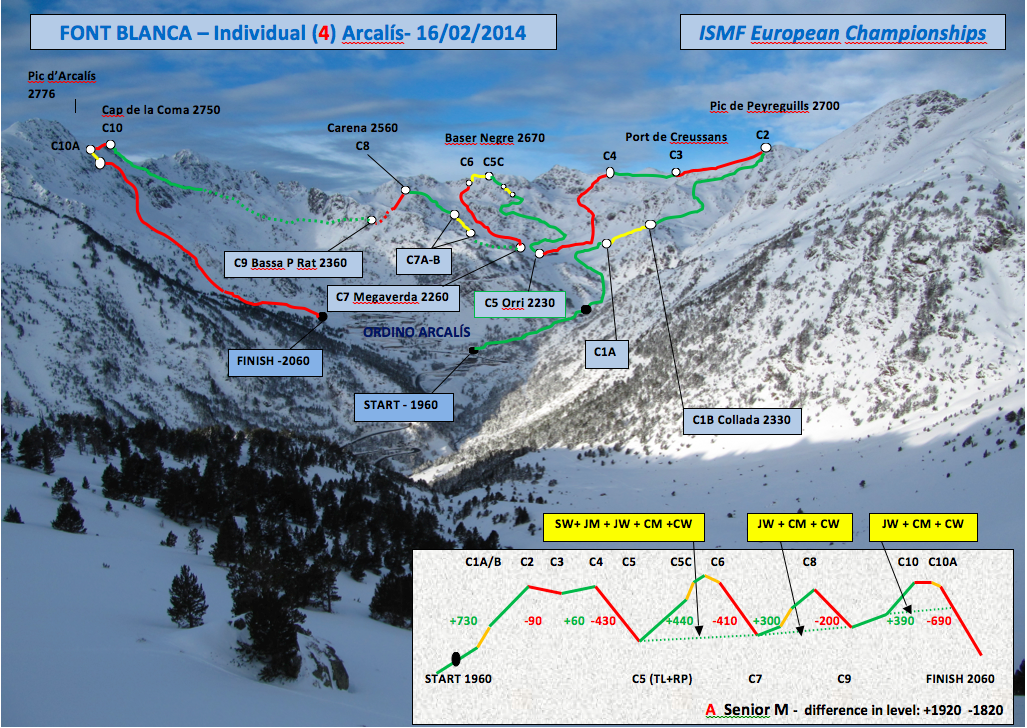 On descents in these races you follow small red flags, but in deep snow many of these were already knocked over and buried so I just threw myself down the hill as fast as possible and took the falls when the terrain didn’t match what my eyes told me. On the third climb the first of the women’s field, whose race missed out the men’s second climb, caught me up. As the first two, Laetitia Roux and Maude Mathys crept past I latched onto their rhythm and dug deep to hold on. Unfortunately one of my pole baskets cracked somehow and bit by bit flapped and then broke off entirely. As your poles are both for balance and propulsion this was a bit of problem, though not quite as bad as the carbon pole I broke in half in the TS Millet the week before! I followed the ladies down the steep descent, their movements helping me read the terrain, save energy and not crash. On this descent I saw another broken carbon pole, it turned out to be Ben Bardsley’s. On the last climb I managed to borrow a pole of a spectator, but by this point my quadriceps had started to cramp as I hadn’t been able to use my arms effectively for half an hour or more. The third and fourth women, Axelle Mollaret and Sophie Bertrand also passed me. Towards the end of this climb I saw Ivor ahead. He seemed to be dying on his feet, and just as Valentine Fabre passed us I slipped through and then trailed her down the last descent into the finish. Despite all the problems I felt content I had given my all. As I wasn’t born on skis, nor am I paid to train 35 hrs a week I don’t expect to ever be up in the leading pack in these events. Nevertheless these races provide a humbling and severe mental and physical landscape against which to throw all your energy and enthusiasm.

I headed back that afternoon towards Barcelona with Janine to fly back to Glasgow. We hadn’t predicted however that the volume of traffic would lead to 3 hour tailbacks. The slow realisation that you are going to miss your flight rolls out over minutes and hours as we calculated the speed we would need to drive to catch it, then how far delayed it would need to be. I have never missed a flight before so the stress was quite a novel and unpleasant sensation. I managed to pay an extortionate amount for a new flight that only got me to London. I stayed with friends before catching a train back north ready for the next battering of Scottish weather.